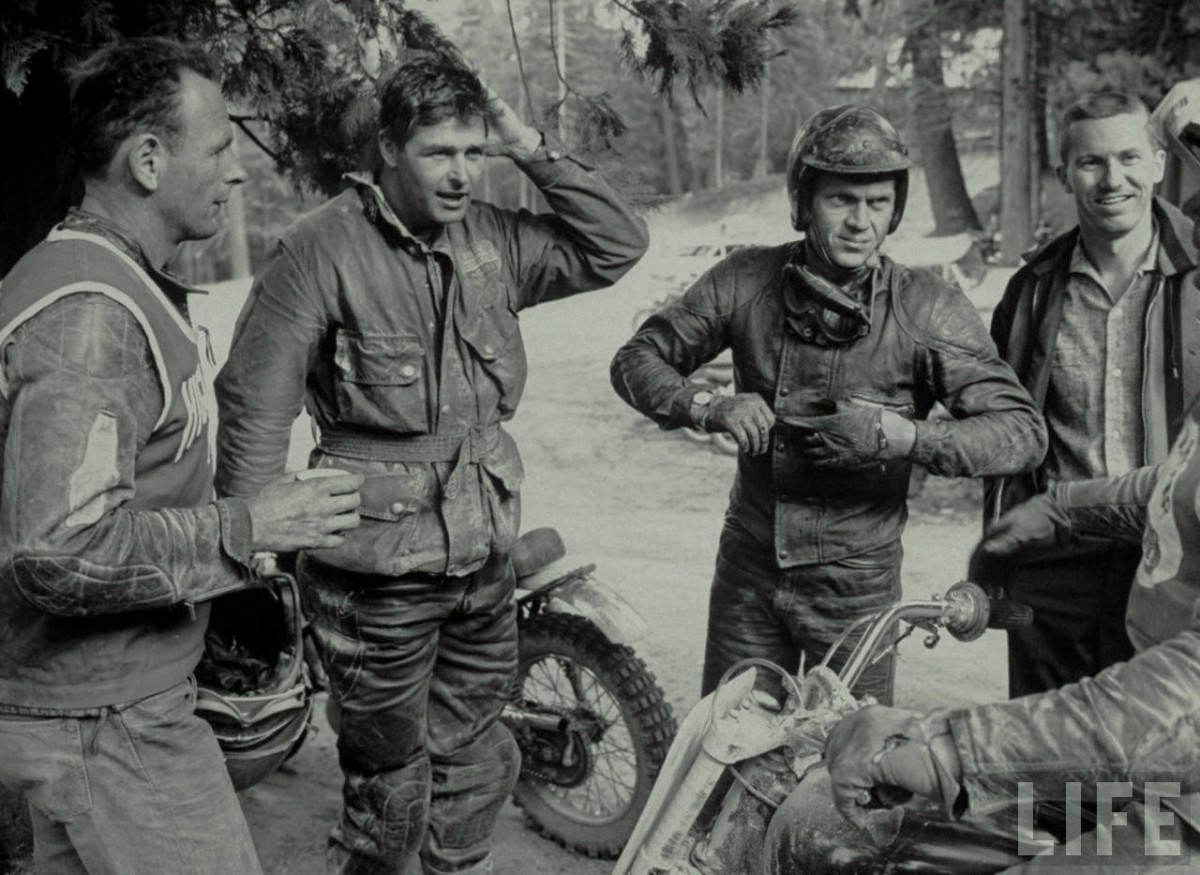 Bud Ekins is nothing short of a legend in motorcycling: he was one of the most accomplished off-road racers ever; an extremely successful Hollywood motorcycle stuntman who performed what is probably the most iconic motorcycle stunt in cinema history; and owned one of the largest curated collections of motorcycles in the world.

Born in Hollywood in 1930, and was a mischievous son to a working-class family. Ekins never completed eighth grade. He spent two years in reform school after a joy ride in a stolen car. Later, when not working in his father’s shop, he went hot rodding. Then the roar of his cousin’s Harley hooked him, his world changed instantly when he rode the motorcycle once as a teenager. He bought a used 1940 Triumph and rode it every day all over the undeveloped, untamed land that surrounded Los Angeles at the time. In 1949, his racing career began when he entered into the highly popular and competitive Big Bear Endurance Run. He got serious about racing after that, and by the mid-50s became the top desert racer in Southern California. He even won the district’s number one plate seven times, which is no small feat. He was so good that he was invited to participate in races internationally, where he had some of his most prestigious wins over his career. Two of Ekins’ greatest nemeses were Eddie Mulder and J.D. Williams. Ekins helped launch Mulder’s career when Mulder beat Ekins in the 1959 Mohave Hare Scramble at age 16, when Ekins was an internationally revered off-road racer. Following the Scramble, Ekins helped Mulder get factory sponsorship from Triumph, forging not only a new legend, but a lifelong friendship. 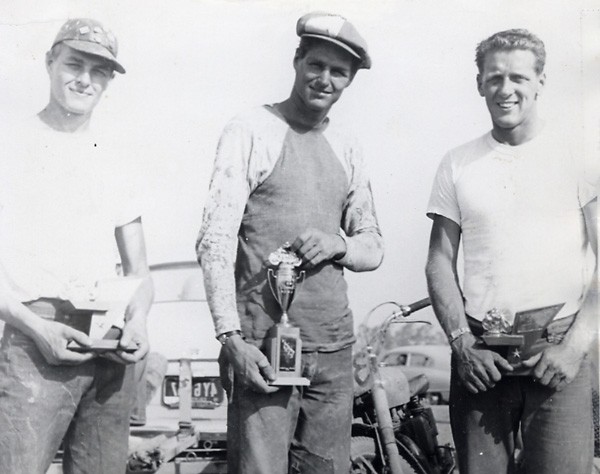 His most famous and possibly closest friend though was Steve McQueen. During the 60s, Ekins owned a Triumph dealership in Hollywood, which became the local hangout for many actors of the day including Lee Marvin, Clint Eastwood and Paul Newman among others. It was here he first met McQueen and the actors lifelong love affair with off-road racing began, thanks to Ekins. In 1962, McQueen was in Germany filming The Great Escape, and asked his friend to come out to do some motorcycle stunt work for him. Ekins had never done any stunt work for movies before, but decided to give it a shot. Together they devised what is now the most iconic motorcycle stunt in movie history: the impossible jump that McQueen’s character Virgil Hilts makes over a fence while trying to escape from a German army pursuers. Ekins was McQueen’s stunt double for the movie, and performed the legendary jump with ease, launching his career as a stuntman. His career as a Hollywood stuntman went on the span an amazing 30 years, performing stunts in such movies as Bullitt, Hell’s Angels ‘69, The Towering Inferno, Animal House, and The Blues Brothers. In a later interview he remembered, ‘I was just up at Bullitt as a utility driver. McQueen was going to do all of the driving, but the first time he got in the car he spun the son of a bitch out and nearly hit a camera. The stunt coordinator said “Get him out of there!” Then said “Ekins, get into McQueen’s clothes.” They cut and sprayed my hair. He had a different hairstyle. Jay Sebring cut it. He was killed in the Sharon Tate murders. He also used to cut Sinatra’s hair. My kids cut mine.’

During the 60s Ekins represented the United States at the ISDT International Six day Trial, a form of off-road motorcycle Olympics. It was as an enduro competitor that Ekins achieved his greatest international racing success. He received a gold medal at the 1962 International Six Days Trials in East Germany, and was part of the 1964 U.S. ISDT team with his brother, Dave Ekins, John Steen, Cliff Coleman and McQueen. He rode a 650cc Triumph TR6 Trophy alongside teammate Steve McQueen in the 1964 International Six Days Trial. In 1965, again on Triumphs, the team competed at the ISDT on the Isle of Man. Ekins won four gold medals and a silver during his seven years of competing in the ISDT during the 1960s. 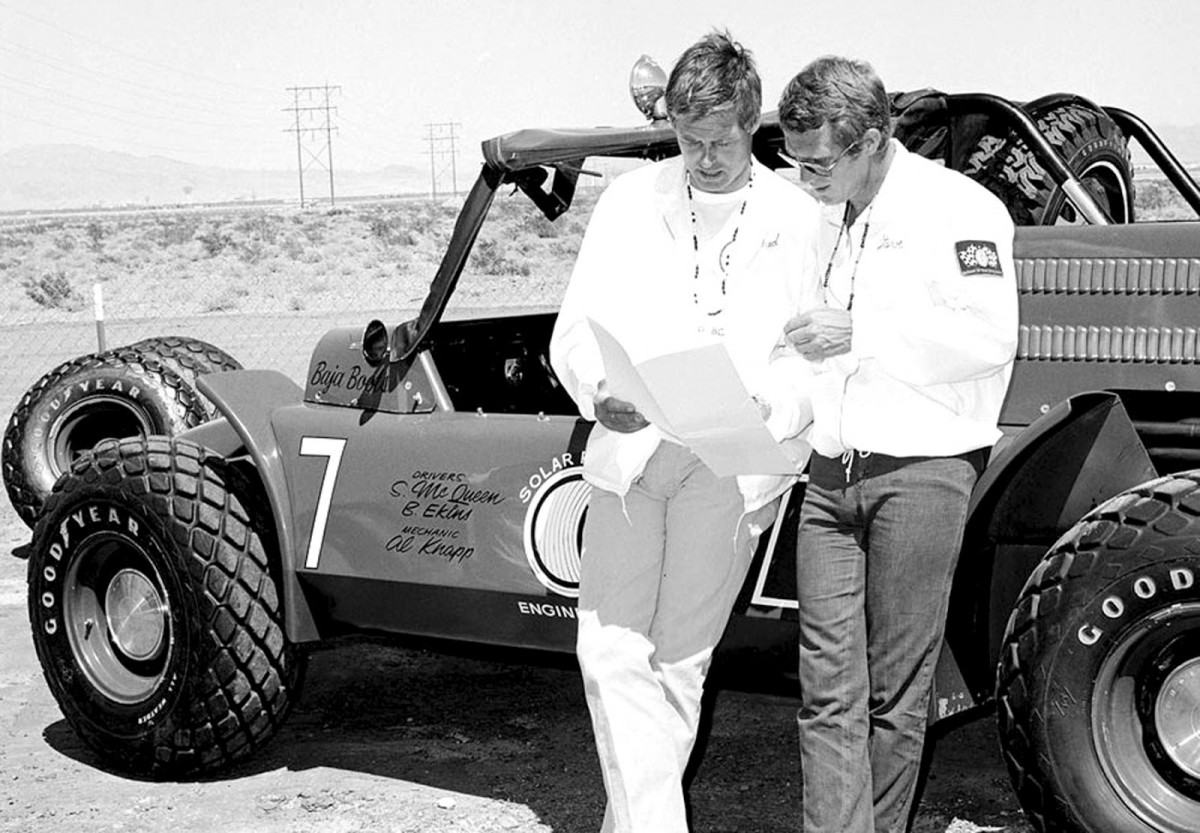 Ekins helped pioneer the sport of desert racing in 1964 when he and his brother Dave rode a motorcycle almost the entire length of Mexico's Baja California peninsula in 39 hours and 48 minutes under gruelling conditions to set the Tijuana to La Paz, Mexico record. Their speed record provided a challenge for other off-road competitors with both, motorcycles and four wheeled vehicles. One of these challengers to Ekins' record run was Ed Pearlman, who decided to organise a yearly off-road race that became known as the Baja 1000. He also participated in many of the early off-road racing events including the Mint 400 and the Stardust 7-11 in Las Vegas. In addition to motorcycles, Ekins raced four wheeled off-road vehicles. He raced alongside Steve McQueen in the inaugural Baja 500 in 1969 and won overall. He worked with fellow Off-Road Hall of Fame Inductee, Vic Hickey for five years, helping him to build the Baja Boot racer and drove three races for Steve McQueen and Drino Miller, another Off-Road Hall of Fame Inductee.

After retiring in the late 90s, Ekins continued to own and run a vintage motorcycle shop in Hollywood. While running the shop, Ekins truly started collecting motorcycles. His goal was to own one of every brand of motorcycle to have ever been made in America. While he never completed his objective, his collection boasted over 150 motorcycles, and featured bikes from 54 American brands, most of which were made before World War I. He was inducted into the Motorcycle Hall of Fame in 1999, and his influence and legacy continues to thrive in today’s motorcycle community, culture, and heritage.