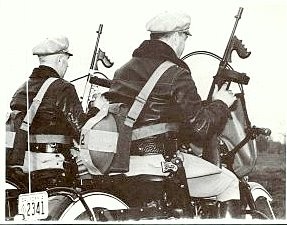 One of the great American signifiers is the California Highway Patrol officer. Dressed in traditional khaki campaign hat and blue-and-gold trouser stripe, the motorcycle riding CHP officer has become iconic.

The founding of the California Highway Patrol really was an evolution more than a birth – one that started in 1911 with the hiring of the first rural traffic officer by San Mateo County. It was formalised in 1929 with the passage of a bill to create a formal Highway Patrol to be part of the Division of Motor Vehicles. However, a few county boards – most notably Los Angeles county – elected to maintain separate traffic squads. It finally became a truly statewide entity when the Los Angeles Motor Patrol was absorbed on July 1, 1932.

The final piece of the puzzle came on October 1, 1947, when the Department of California Highway Patrol was created – to be headed by a commissioner appointed by the governor.The California Highway Patrol was created by the state legislature and signed into law by Gov. C.C. Young on August 14, 1929. During its first 10 years, the CHP grew into a force of 730 uniformed personnel. The legislation which created the CHP also created its academy for training future officers. Cadets attend a 27-week program and receive more than 1,100 hours of training. They receive training in weapons, emergency vehicle operations and emergency medical services.

Early CHP motorcycles included Indian, Harley Davidson and Henderson manufactured bikes during the 1920s and 30s, though by 1941 the main manufacturers used at the training academy were Harley-Davidson and Indian. This continued through to the seventies when CHP decided to renew their Harley fleet and tested many motorcycles including the Honda 750 four, the Suzuki 850, Moto Guzzi and finally the Kawasaki Z900 and then 1000C1 made famous in 'CHiPs'. 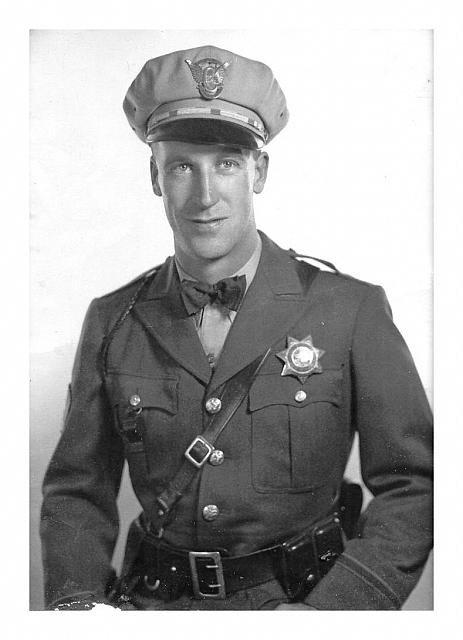 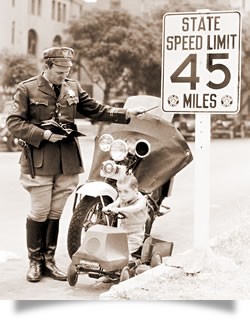 In 1955, the CHP got its first blast of national publicity when “Highway Patrol” starring Academy Award winner Broderick Crawford debuted on television. Although the show was technically about a generic highway patrol that could have been located in any number of states, TV lore has it that the show was first promoted by CHP Commissioner Bernard Caldwell, who had one of his civilian public relations people go to Hollywood and “get us a show like Dragnet.” And for the first three seasons, the actors (except Crawford) wore actual CHP uniforms with slightly altered arm patches and badges. The show ran until 1959.

In 1969 the CHP was notably involved in the Student Demonstrations at Peoples Park in Berkley. Governor Ronald Reagan had been publicly critical of university administrators for tolerating student demonstrations at the Berkeley campus. Reagan called the Berkeley campus "a haven for communist sympathisers, protesters, and sex deviants." He considered the creation of the park a direct leftist challenge to the property rights of the university, and he found in it an opportunity to fulfil his campaign promise. On Thursday, May 15, 1969 at 4:30 a.m., Governor Reagan sent the CHP into People's Park. The officers cleared an 8-block area around the park while a large section of what had been planted was destroyed and an 8-foot (2.4 m)-tall perimeter chain-link wire fence was installed to keep people out and to prevent the planting of more trees, grass, flowers, or shrubs. It became the impetus for the "most violent confrontation in the university's history."

Women joined the CHP officer ranks in 1974 after several women challenged regulations that restricted them to non-officer positions. For the first time, female cadets entered the CHP Academy with their male counterparts. By the end of the 16-week training, female cadet Deborah A. Street had captured the pistol shooting award with a perfect 300 score. Academically, five of the top eight graduates were women. 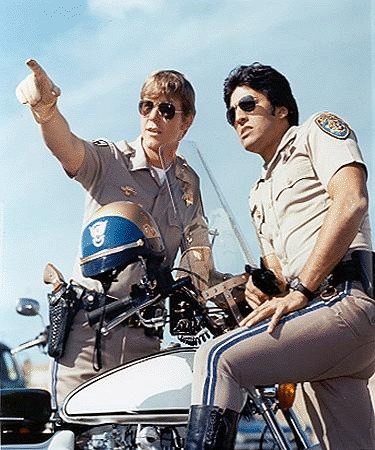 From 1977-1983, the Highway Patrol received a second extended showering of television adulation from the show CHiPS, starring Erik Estrada and Larry Wilcox. The show was a hit worldwide exposing foreign audiences to the California dream and California crime in equal measure. It also served to embed the CHP Khaki and Gold into cultural memory creating an iconic signifier for California Law Enforcement.