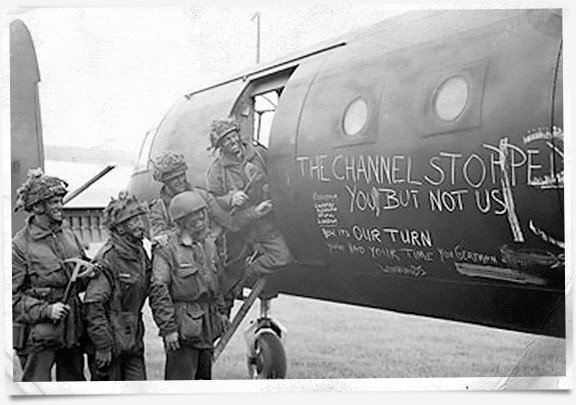 In the early morning hours of June 6, 1944, a small detachment of British Airborne troops stormed the German defence forces and paved the way for the Allied invasion of Europe. Pegasus Bridge was the first engagement of D-Day, the turning point of World War II. This daring mission was so crucial that, had it been unsuccessful, the entire Normandy invasion might have failed.

D-day - the Allies’ “Great Crusade” was set to begin at 06:00 on 6th June 1944. Troops, vehicles and equipment would be landed on the beaches of Normandy and then push forward to the local townships such as Ouistreham and Caen.

The British 6th Airborne Division would land near the village of Ranville and seize the two remaining intact road bridges over the River Orne (Pegasus Bridge) and River Dives (Horsa Bridge) in addition to protecting the flank of the invasion forces. The Airborne Infantry had clear orders to hold the bridges against German attack until relieved by units moving up from Sword Beach.

Initially it was planned that 5th Parachute Brigade would take and hold the bridges, however Divisional Commander, Major-General Gale decided the only way to take the bridges would be by a Glider Assault. He subsequently asked Brigadier Hugh Kindlsey from 6th Air Landing Brigade to nominate his best company. 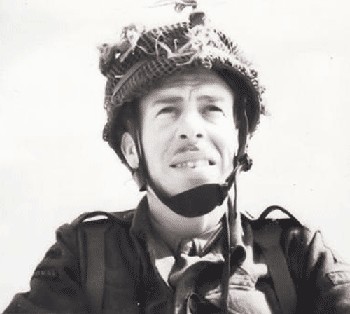 “D” Company, 2nd Airborne Battalion, Oxfordshire and Buckinghamshire Light Infantry, under the command of Major John Howard were selected. Howard put the company through intense training, including exercise attacks against like for like bridges in Exeter, city fight training in the bombed out centres of cities and even going so far as to acclimatise the unit to Night Operations by changing their daily routines.

General Gale tested the Company in two exercises and it soon became apparent that they would not be able to complete the objectives on their own. Major Howard was asked to select two more platoons from the Battalion to complement the roster. A Platoon of Royal Engineers would also be attached to deal with any Explosive Charges that may have been set on the Bridges.

6 Airspeed Horsa Gliders would ferry the Company to the target area, towed by Halifax Bombers. On 5th June, they made final preparations for the operation, with personal weapons and ammunition being issued. This also included the PIAT (Projector Infantry Anti-Tank) and the No. 82 Gammon Bomb, both of which would become very useful during the mission. Each platoon was also issued a radio and 2 Inch Mortar. Just before boarding the gliders, codewords were also issued; ‘Ham’ Indicated the Canal Bridge (Pegasus Bridge) had been captured intact and ‘Jam’ for the River Bridge (Horsa). Capture and Destruction of the Canal Bridge would be signalled with ‘Jack’ and ‘Lard’ if a similar fate befell the River Bridge. 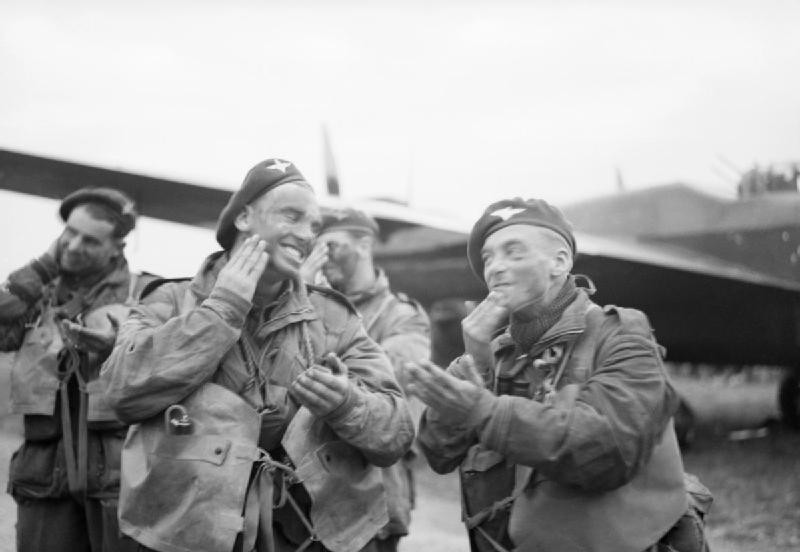 The Gliders began landing at approximately 00:16 with the Number One glider coming down in the barbed wire defences of the Canal Bridge. The other gliders followed at one minute intervals, Number Two glider, broke in half on landing and came to rest near a large pond. Sadly one man was thrown in and drowned, weighed down by his equipment. 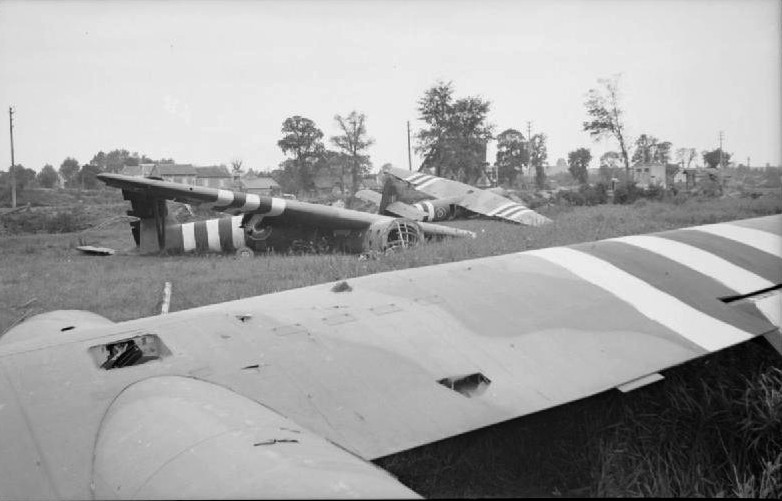 Brotheridge and Smith’s platoons moved for the Bridge while Lieutenant Wood’s made for the Trench system on the North East Side. By fortunate circumstance the defenders were not on ‘full alert’ and only two sentries were on the bridge. One fled, while the other fired a flare gun to alert nearby defenders before being shot by the British Infantry. Alerted by the flare, German Machine gunners opened fire on the Bridge wounding Lieutenant Brotheridge as he threw a Grenade at them.

The grenade silenced a Machine Gun position and further German MG's were knocked out by Bren Gun fire. Brotheridge’s platoon then advanced across the Bridge and took up defensive positions, followed by Lieutenant Smith and his platoon exchanging fire with German Defenders. Smith was wounded by a Grenade while crossing. Brotheridge and Smith’s platoons then began the task of clearing the last German defenders from the trenches and bunkers which they completed by 00:21. Sadly this was too late for Brotheridge to receive treatment and he died from his wounds.

Lieutenant Wood’s platoon cleared the German Defenders on the East Bank, whereupon Wood’s was also hit and wounded. All three platoon commanders at the Canal Bridge were now dead or wounded.

At the River Bridge, the Number 5 glider landed first, 300m from the bridge. Lieutenant Fox’s platoon was immediately pinned by German Machine Guns which they silenced with a direct hit from their Mortar. Number 6 Glider landed next 700m short of the Bridge. Lt Sweeney left one section behind to secure the west bank then took the rest of his platoon to the East bank to set up and support Lt Fox’s platoon. Glider Number 4 was reported missing, it had landed at the wrong bridge, over 6 Miles away. Captain Priday and Lieutenant Hooper’s platoon were fighting their way back to the correct bridges but had a long way to go.

Lieutenants Fox and Sweeney reported to Major Howard that the River Bridge had been secured. Major Howard then broadcast the ‘Ham’ and ‘Jam’ Codewords to Command.

Reinforcements from the 7th Parachute Battalion landed shortly thereafter at 00:50. They formed up and moved to their defensive positions at 01:10 to be greeted by the Regimental Commander of the German forces stationed to guard the Bridges. His motorcycle escort was quickly dispatched and the halftrack he was travelling in forced off the road by the British defenders. Major Schmidt and his driver were subsequently taken prisoner.

Soon after this the Germans launched their first counter attack to retake the Bridges. Fortunately for the British defenders 21st Panzer Division, stationed nearby, were still awaiting Hitler’s personal permission to advance. Hitler of course, was still being in bed with none of his staff wanting to wake him, nevertheless, the 192nd PanzerGrenadier Regiment supported by the 1st Panzerjaegar Company launched an attack. As the first Mark 4 Panzers approached however, the lead vehicle was hit by a PIAT round, which detonated it’s on board ammunition completely destroying it. The other Tanks subsequently retreated and the 192nd aborted their attack.

Not be deterred the Germans resumed their attack at 03:00 with Self Propelled Artillery, Anti-Aircraft guns and Mortars in an attempt to displace the Airborne. The British Defenders were forced back but formed a new defence line through which the 192ndcouldn’t breach.

German patrol boats were next to attempt to break the deadlock, moving down the canal from Caen and using their 20mm Cannons. Number two Platoon’s PIAT team shot and hit the lead boat’s wheel house causing it to crash, the second boat disengaged and retreated.

Clearly showing their desperation a single Luftwaffe Fighter-Bomber attempted to destroy the bridge having avoided the Allied Air Patrols. It dropped a single bomb which hit the Canal Bridge but failed to explode.

The 192nd Panzer Grenadiers continued to attack and harass the British defenders, and brought them to within breaking point. However the stubborn defenders continued to thwart them, destroying 13 of 17 German tanks and blocking the road with one wrecked vehicle; destroyed by a single Gammon bomb!

By now it was midday, Hitler was awake and 21st Panzer Division was finally given orders to move on the beaches. Unfortunately for them, the RAF and the 2nd Tactical Air Force were waiting for them and caused heavy losses in their advance towards the beaches. Elements did manage to engage British paratroopers at Ranville, before withdrawing.

At 13:30, it was practically all over, 1st Commando Brigade arrived to provide relief, and they were followed in the evening by 2nd Battalion of the Royal Warwickshire Regiment.

Major Howard was awarded the Distinguished Service Order presented by Field Marshall Montgomery himself. Lieutenants Smith and Sweeney each received the Military Cross, Sergeant Thornton and Lance Corporal Stacey each received the Military Medal. Lieutenant Botheridge was posthumously mentioned in dispatches. Finally, Air Chief Marshal Trafford Leigh-Mallory praised the pilots involved saying the operation included some of the most outstanding flying achievements of the war. 8 Glider Pilots were awarded the Distinguished Flying Medal.

It’s amazing to note that losses were extremely light, certainly when compared with other Airborne Operations like those the Germans embarked on at Crete, or the British Airborne’s experience during Operation Market Garden.  Of the 181 Men involved in Operation Deadstick, only two were killed, Lieutenant Botheridge who succumbed to his wounds and Lance Corporal Fred Greenhalgh who drowned after being thrown from Number 2 Glider. 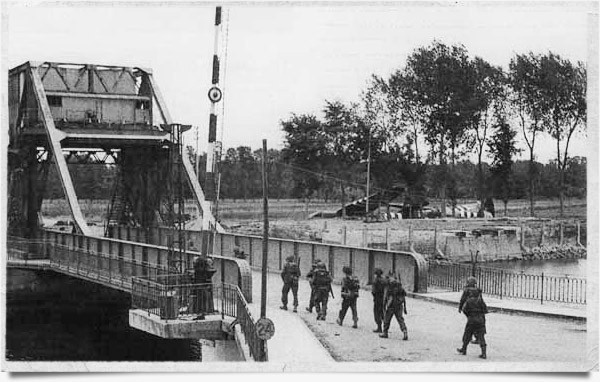 The Caen Canal Bridge was renamed 'Pegasus Bridge' in reference to the Pegasus emblem worn by the 6th Airborne Division in memory of this action. The River Orne Bridge was renamed 'Horsa Bridge' after the gliders that carried the men who landed here.