As Europe was engulfed by war in 1939, the USA seemed self consciously estranged. Countless popular songs warned the government to devote themselves to helping the country's struggling farmers rather than the embattled Europeans. Six years later, America emerged from a global war as the worlds greatest superpower. Soon American values and products would permeate the world and in the process, America's archetypal clothing would undergo its own transformation.

Although historically there has been a longstanding tradition that Levi's supplied denim wear to the US Navy, this seems to have no basis in fact. The Levi's company itself believes its only government contract was fur lined parkas for Alaskan USAAF troops. Instead, Levi's main patriotic effect was to improve the morale of servicemen who, according to many letters home, slept with their precious jeans under their pillow, probably because if they were stolen there was only a remote possibility of being able to buy another pair. 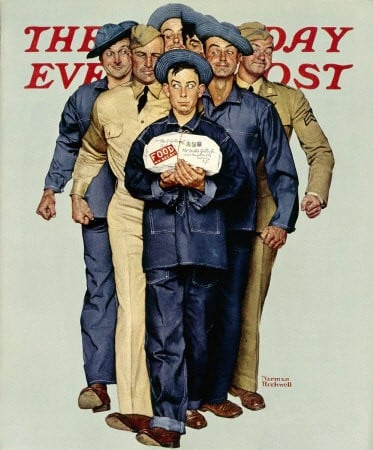 Denim workwear had been just about as ubiquitous with the US military as it had been with the civilian population; denim Bell Bottoms were first approved for US Navy use in 1901. Although many companies, including Eloesser-Heynemann, produced Bell Bottoms in small numbers, Bell Bottom manufacture during WWII was dominated by traditional military suppliers such as the Polkton Manufacturing Company of Marshville, North Carolina. which produced Seafarer Bell Bottoms. Much of the denim for these pants was '818' or Jelt from Cone Mills. which at that time was also producing Levis's denim - perhaps the reason for the links between the Navy and Levi's. Cone subsequently received the Army-Navy E Award for its work towards the war effort.

Blue denim work clothing was adopted as standard by the US Army on 11 June 1919, replacing brown work clothing used before. The top was a jumper style pullover, the trousers had five pockets -- two front, two hip, and a watch pocket. In 1933 a one-piece work suit (coveralls) was adopted in blue denim for use by mechanics, drivers, machinists, and others in similar roles. This was in addition to and did not replace the two piece work uniform. The M1937 U.S. Army Indigo-Blue-Denim Uniform was the grandfather of all HBT fatigue uniforms. While the Axis countries had modernised their clothing needs the US lagged behind with only slight improvements from uniform designs that spanned during the 1920s and 1930s. Denim had been produced for military purposes starting in the late 19th century and since it was such a durable and comfortable fabric the military saw no need to update the technology. The Army did eventually replace the denim work uniform with the Herringbone Twill uniforms but what the Army didn't know was just how popular the denim styling would remain post WWII. This uniform was also issued to prisoners-of-war and you can find original examples with the obvious "PW" still painted on the back. 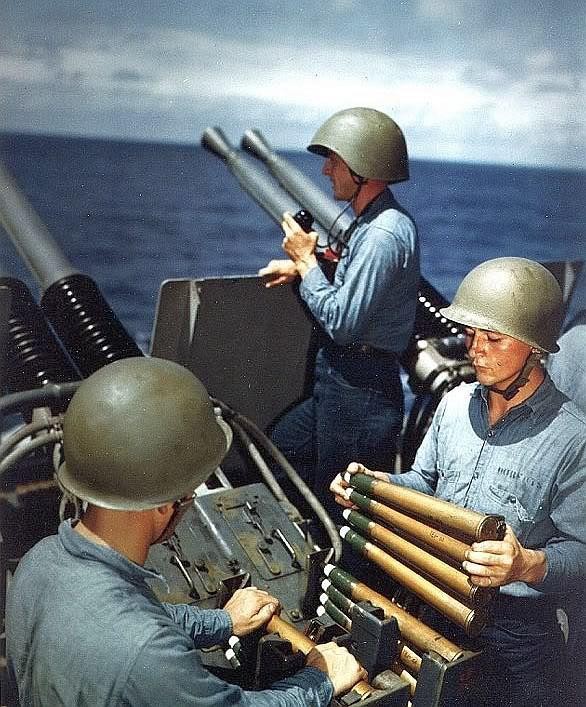 Meanwhile, a fast growing future rival of Levi's was becoming the biggest workwear manufacturer to supply America's armed forces. The Blue Bell Overall Company, of Greensboro, North Carolina and the Globe Superior corporation had merged in 1936, purchased the HD Bob Company in 1940 and then the Casey Jones Company of Baltimore, Maryland - owner of the then little used name 'Wrangler' - in 1943. In its factories all over the south, Blue Bell Inc produced over 24 million items of military clothing. Over in Kansas, the HD Lee Company also produced fatigues, jackets and flights suits for the US military - but maintained its advertising for its workwear and cowboy pants range, all of it aimed at civilians who quite possibly couldn't even get hold of the product.

The wartime cutbacks however did contribute to the development of modern Levi's jeans. The 'cinch' buckleback disappeared for ever; the distinctive arcuate stitching was replaced by the painted version, which normally disappeared after a number of washes. The stitching returned in 1947 along with a new silhouette creating the blueprint for the iconic contemporary 501 jean we know today. During WWII Levi's managing director Walter Haas had come under pressure from wartime authorities to compromise standards and reduce the weight of the denim used in the 501 and other jeans. He refused outright. However, in the social melting pot that left by a world war, Levi's was about to change from a Californian institution to an all-American one. And as an all-American institution, it's appeal would soon reach worldwide.

An article in a 1942 edition of Colliers Magazine pointed the way to the sportswear of the future, suggesting that more and more average Americans were waking up to denim. They found that it suited them and deemed it a sensible fabric in light of the new agricultural and industrial toil that needed to be finished if the fascists were to be beaten. Some seven years before this article hit the newsstands American kids began wearing jeans, but it was WWII that created a market for women's jeans and the course of women's style was forever altered. Post war, the evolution of denim took another turn, this time with the advent of Rock and Roll music and the World's first 'teenagers' it would become fashion rather than workwear and go on to signify rebellion and blue collar cool for the next 50 years.