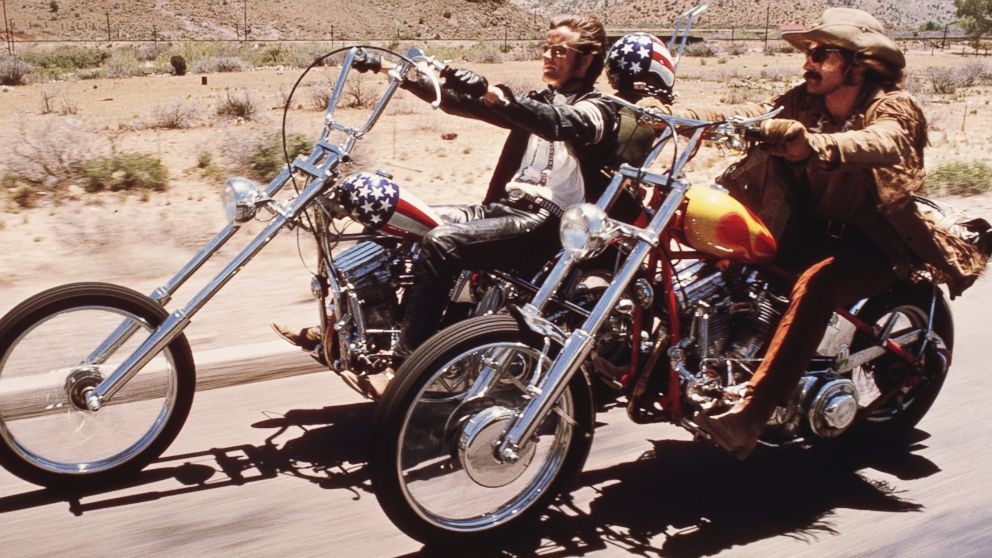 The star was a drunken hippy. One of the writers was an acid-fried biker. And the director was a paranoid control freak. But the really bad news was that all three of them were Dennis Hopper.

Hopper's subversive road movie burst onto the cinema screens of a confused America in 1969, the title was in itself a double entendre, the term Easy Rider was slang for a hooker's old man - 'not a pimp, but the dude who lives with her, because he's got the easy ride'. But it was also a telling and powerful reference to what was happening to America in the late Sixties, in the words of Hopper - 'Liberty had became a whore and the whole country took an easy ride.'

However, it isn't the sex, music or huge drug intake - both on and off-screen - that links Easy Rider inextricably to the late Sixties. What really marks the film out as a product of that fractured, uncertain age was that it got made at all. And, in particular, that it got made by Dennis Hopper and Peter Fonda.

Certainly, when the pair announced their intention of making the ultimate biker movie, few sane people would have wagered on them finding the finance - let alone producing a film that not only became one of the biggest box-office hits of 1969 but also completely changed the way major studios treated their burgeoning baby-boomer generation. If the film's proposed subject matter - two doped-up philosophising hippies (Hopper and Fonda) use the proceeds from a drug deal to ride across America in search of 'freedom' - wasn't enough to put off potential investors then Hopper and Fonda's Hollywood reputations undoubtedly were.

Hopper was a Dean generation character actor who had been blacklisted following a bust-up with director Henry Hathaway. Kicked out of mainstream pictures, he was reduced to working with underground filmmakers like Roger Corman. It was while shooting Corman's The Trip that Hopper got to know Peter Fonda. The son of Hollywood legend Henry, Peter had thrown away a promising career in respectable cinema to appear in zero-budget exploitation movies like The Wild Angels.

Starring roles in The Trip did little to improve either man's standing. Far more helpful was their decision to hook up with satirical author and screenwriter Terry Southern. Southern's involvement provided them with a title, Easy Rider, and a backer in the shape of Bert Schneider. The latter was a fledgling film producer who had just hit the big time courtesy of his kit-form boy band The Monkees and was happy not only to provide money but to let Hopper and Fonda become director and producer respectively. 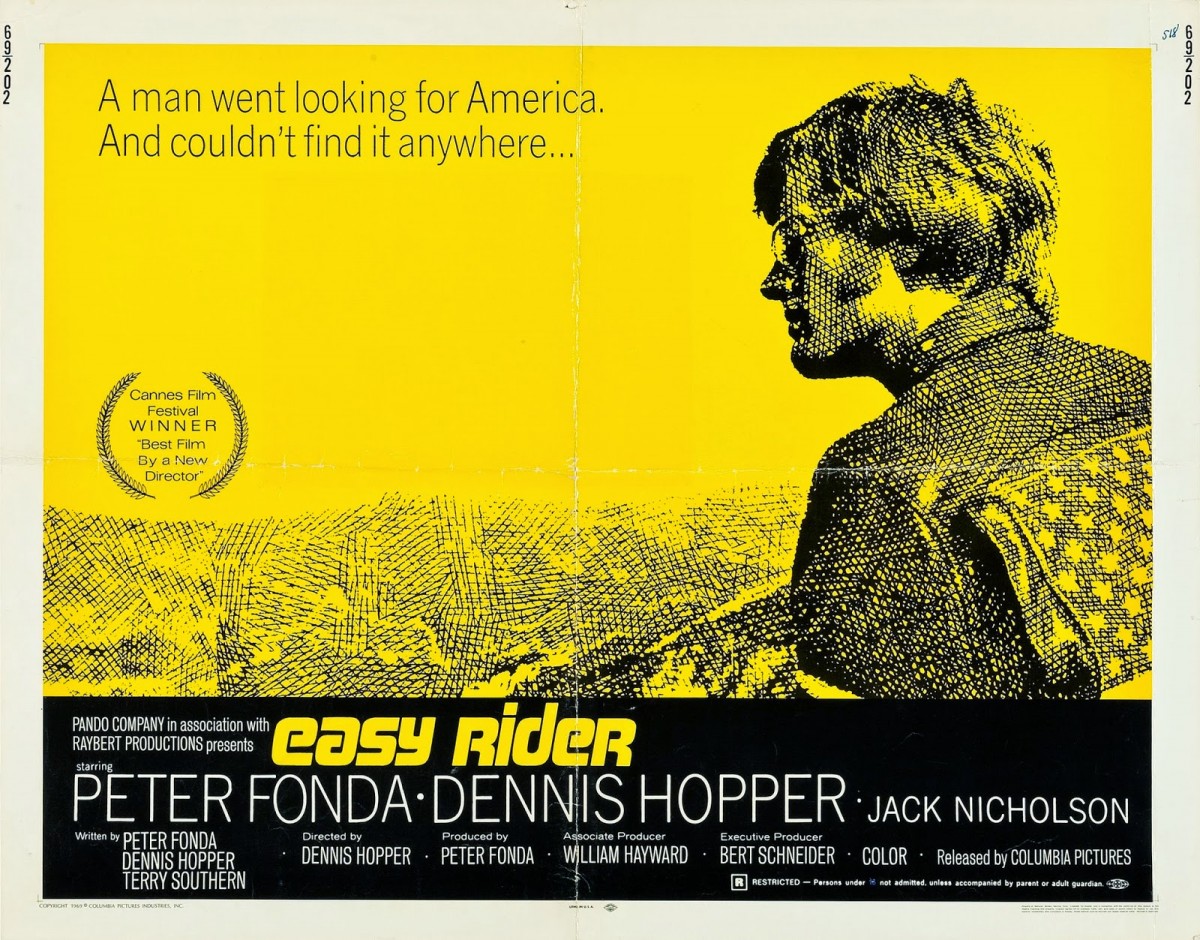 As it turned out, any problems the production may have had over finance were as nothing compared with the trauma of the Easy Rider shoot. During most productions, on-set drug-taking and a leading man breaking his ribs would constitute major concerns. In the case of Easy Rider, these seemed minor inconveniences when weighed against the bizarre antics of Hopper himself. A heavy drinker, famed for his to-the-edge performances and confrontational manner, the director's instability and paranoia resulted in clashes with everyone from Fonda downwards. When he wasn't picking fights, Hopper would fill his time forcing Fonda to relive memories of his mother's suicide and dragging actress Karen Black through the streets of New Orleans in search of inspiration.

Hopper justified his behaviour on the grounds that he wanted to make a special film. And he did. The massive commercial success of Easy Rider ensured that for a couple of years major studios were happy to throw money at any wild-eyed auteur capable of capturing some of that youth buck - a period that Hopper himself brought to the close with 1971's The Last Movie. 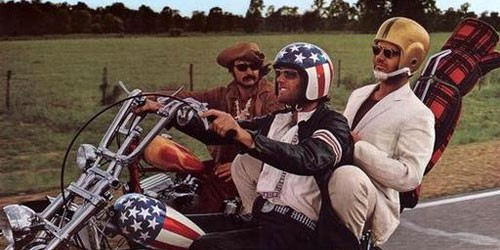 Peter Fonda later recalled, 'Easy Rider really was a trip. Back when I was making studio pictures like Tammy And The Doctor, I got a lot of fan mail - thousands of letters a week asking for my autography and my picture. When I did Easy Rider, I got letters from people saying, "What do I do?", "How do I speak to my father?", "How do I keep myself from committing suicide?", "How do I live?" Nobody was asking me for my picture and my autograph any more.'

Most importantly, the film represented a crossroads in the film industry, one where the old Hollywood system had become stagnant while young filmmakers were revitalising the medium with fresh, creative ideas that were having a real impact on the culture and their generation. The movie was responsible for launching Jack Nicholson's career at a time when he was about to give up acting for producing. And it certainly enabled Fonda and Hopper to pursue their own separate visions on film while maintaining creative control.

Unfortunately, the tensions that arose between Fonda and Hopper during the film's making erupted into an ongoing dispute over the "authorship" of the movie with Hopper claiming solo credit for the story idea and script in a lawsuit. Hopper, in turn, was later sued by Rip Torn for spreading lies about a physical confrontation the two had in a public restaurant, which may have been the reason Torn was replaced by Jack Nicholson in the film. To it's fans though, none of this matters much, the movie stands alone for its iconic soundtrack featuring songs by Steppenwolf, The Byrds, Jimi Hendrix and others, the innovative, freewheeling cinematography by Laszlo Kovacs, Nicholson's scene-stealing performance and the its fresh take on two young nonconformists looking for the real America.