False flag operations have changed the course of World history on countless occasions for hundreds of years. The contemporary term false flag describes government led covert operations designed to deceive the general populous, of its own country, in such a way that the operations appear as though they are being carried out by other entities, groups, or nations. Historically, the term "false flag" has its origins in naval warfare where the use of a flag other than the belligerent's true battle flag is displayed as a deception, or, ruse de guerre, before engaging the enemy.

If one follows the money in any false flag operation, you will see that the people with the most to gain have always occupied the key military and civilian positions, not only to ensure the success of the mission, but also to cover up the crime and reap the most reward. Such is the hallmark of false flag operations throughout history. Leading Nazi Hermann Göring once stated: "Naturally the common people don't want war; neither in Russia, England, America, or Germany. That is understood. But after all, it is the leaders of the country who determine policy, and it is always a simple matter to drag the people along, whether it is a democracy, a fascist dictatorship, a parliament, or a communist dictatorship. Voice or no voice, the people can always be brought to the bidding of the leaders. That is easy. All you have to do is to tell them they are being attacked, and denounce the pacifists for lack of patriotism and exposing the country to danger. It works the same in any country."

The most common false flag operations consist of a government agency staging a terror attack, upon its own people, to then falsely blame the uninvolved entity (country/organization etc). The resulting carnage brings about a groundswell of public indignation and opinion in favour of the government and whatever policy they put forward. At least two millennia have proven that false flag operations, with healthy doses of propaganda and ignorance, provide a great recipe for endless war. During the 20th century they were as numerous as they were insidious. From The Manchurian Incident in China, the Reichstag Fire in Berlin, the myth of the 'surprise' attack on Pearl Harbour, to the Tonkin Gulf incident that facilitated the Vietnam war. 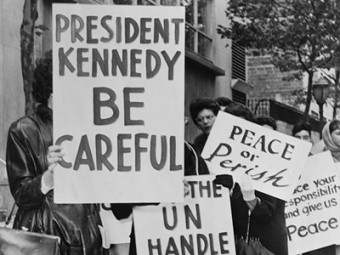 One operation in particular (which thankfully was never implemented) could have easily precipitated a nuclear World War III - Operation Northwoods.

In 1962, the U.S. Joint Chiefs of Staff, headed by General Lyman Lemnitzer, unanimously proposed state-sponsored acts of terrorism on American soil, against its own citizens. The head of every branch of the US Armed Forces gave written approval to sink US ships, shoot down hijacked American planes, and gun down and bomb civilians on the streets of Washington, D.C., and Miami. The plan was only overturned when President Kennedy refused to endorse it. The concept of Operation Northwoods was to engineer a situation where the blame for the (self-inflicted) terrorism would fall on Cuba's leader, Fidel Castro, after which the American public would beg and scream for the Marines to storm Havana. Among other heinous acts, Operation Northwoods proposed faking the crash of an American commercial airliner. The disaster was to be accomplished by faking a commercial flight from the US to South America, the plane would be boarded at a public airport by CIA agents disguised as college students with aliases going on vacation. An empty, remote-controlled, clone of the commercial jet would then swap places for it at a given rendezvous point in flight, as it left Florida, and the real airliner would then land at a secure area in Eglin Air Force base. A May-Day transmission pertaining to come from the commercial jet would then be sent out stating that they had been attacked by a Cuban MIG fighter. The empty remote-controlled clone would then be blown up and the public would be told that all of the US citizens aboard were killed.

The document also suggested numerous other acts of domestic terrorism including using a possible NASA disaster (astronaut John Glenn's death) as a pretext to launch the war. The plan called for "manufacturing various pieces of evidence which would prove electronic interference on the part of the Cubans if something went wrong with NASA's third manned space launch. Further to this buildings in Washington and Miami would be rigged with explosives and blown up. Cuban agents (undercover CIA agents) would be arrested and confess to the bombings. In addition, false documents proving Castro's involvement in the attacks would be "found" and given to the press. Another element of the plan suggested attacking an American military base in Guantanamo with CIA recruits posing as Cuban mercenaries. This involved blowing up the ammunition depot and would obviously result in material damages and many dead American troops. As a last resort, the Pentagon even considered using public taxes to bribe another country's military to attack their own troops in order to instigate a full-scale war, the plan specifically mentioned bribing one of Castro's commanders to initiate the Guantanamo attack. Below are some of the actual declassified Northwoods documents 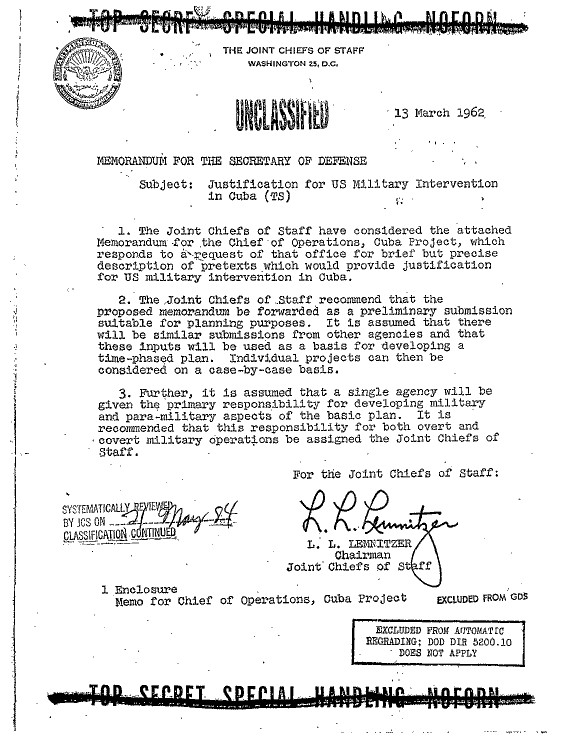 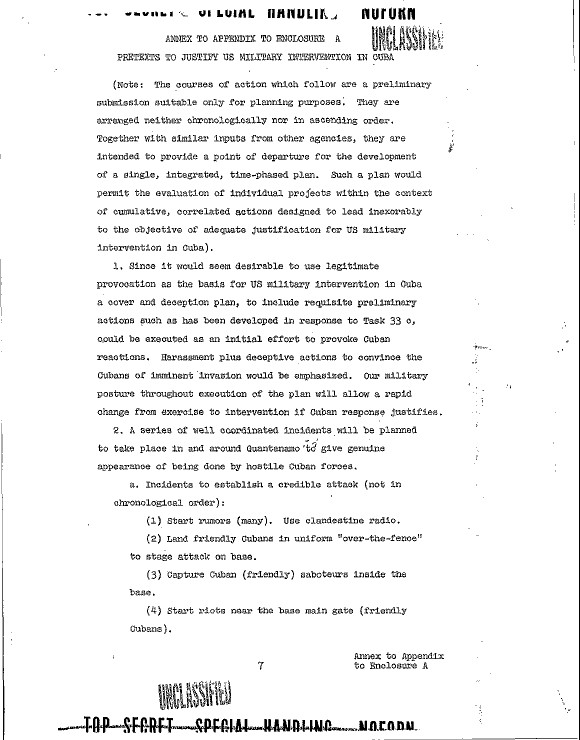 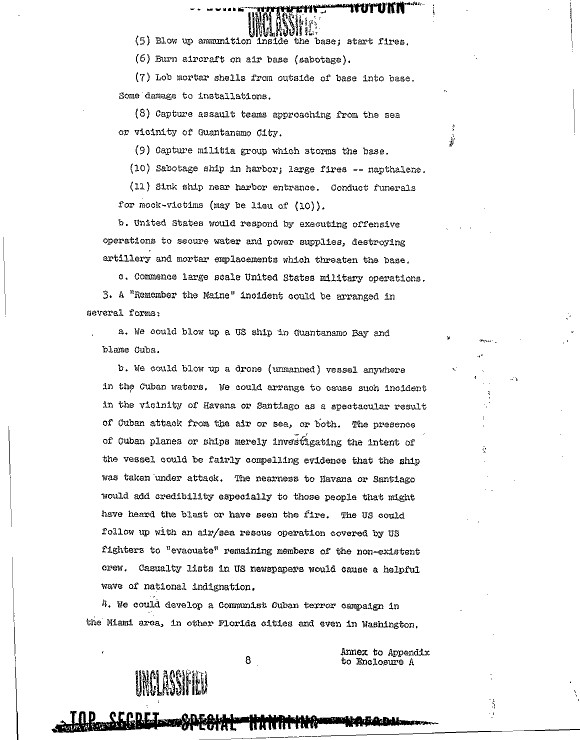 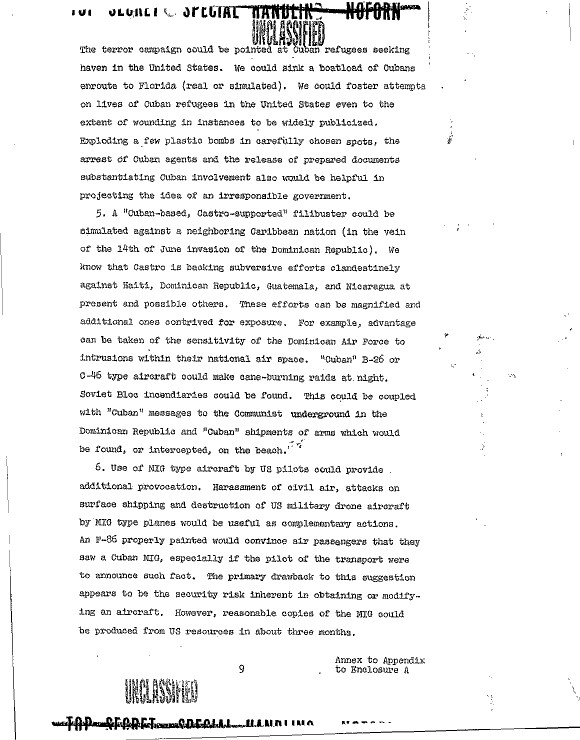 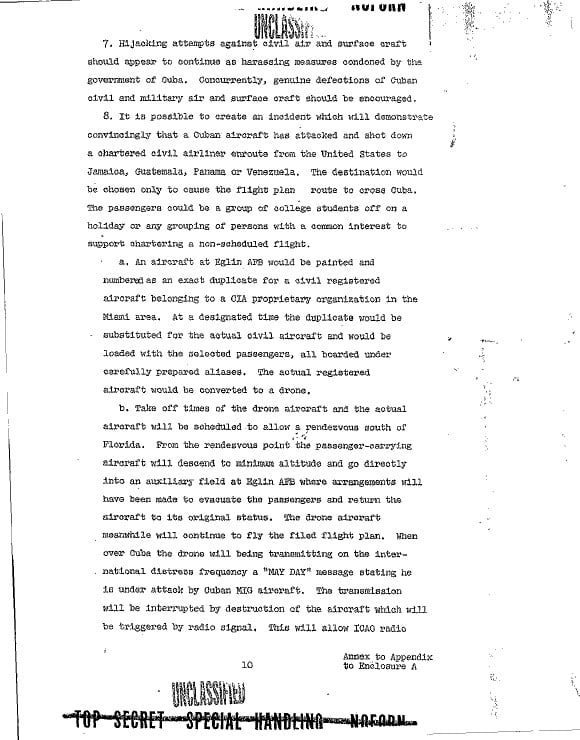 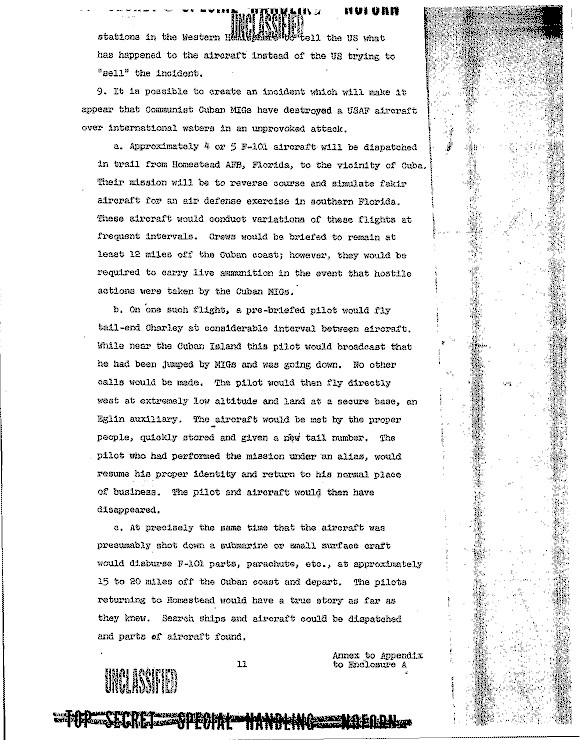 Operation Northwoods was only one of several plans under the umbrella of Operation Mongoose. Shortly after the Joint Chiefs signed and presented the plan in March, 1962, President Kennedy, still smarting from the Bay of Pigs fiasco, declared that he would never authorise a military invasion of Cuba and refused to endorse the Northwoods project. In September, Kennedy denied the Chairman of the Joint Chiefs, General Lyman Lemnitzer, a second term as the nation's highest ranking military officer, and by the winter of 1963, Kennedy was assasinated, apparently by Lee Harvey Oswald, a communist sympathiser, in Dallas Texas.

The public would only learn about Northwoods 35 years later, when the Top Secret document was declassified by the John F. Kennedy Assassination Records Review Board.

Nearly 40 years later a very similar event would actually take place on American soil bearing all the hallmarks of Operation Northwoods - the destruction of the World Trade Centre on the 11th September 2001.