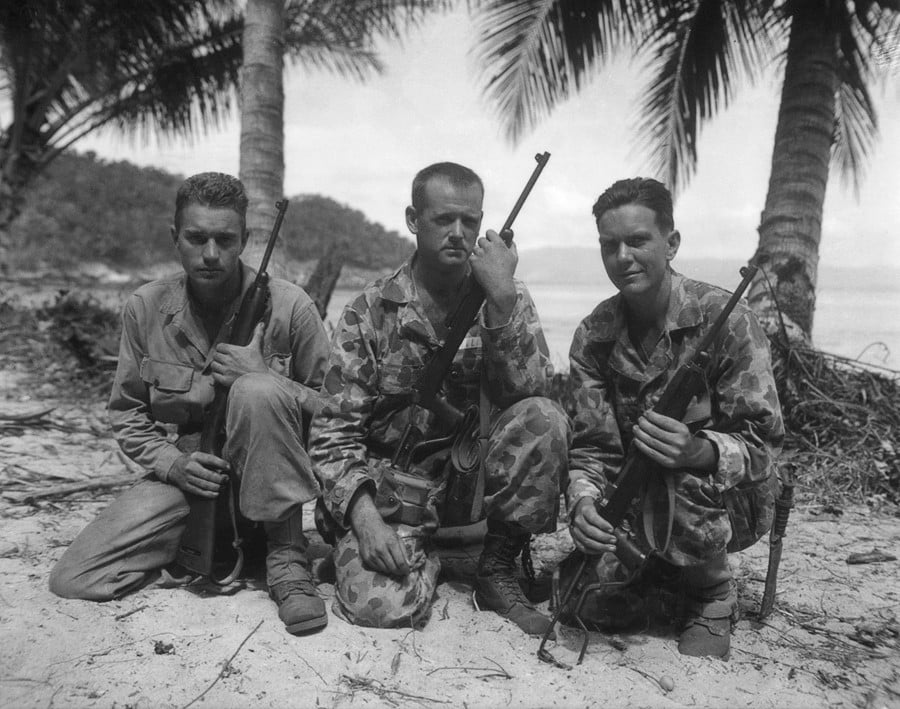 Since 1940 the US Army Corps of Engineers had been applying themselves to developing camouflage for military applications. The process of its introduction into the US supply system was rushed however, brought about by an urgent request General D. MacArthur in July of 1942 for production of 150,000 jungle camouflage uniforms for use in the Pacific Theatre. The pattern chosen was actually designed by civilian Norvell Gillespie, a horticulturist and garden editor of Sunset, Better House and Gardens, and the San Francisco Chronicle. The M1942 green dapple or spot design, reversing to a tan/brown variation, began distribution to US military forces beginning in August of that year. Nicknamed “frogskin” by many GIs, the pattern consists of a five colour green dominant “jungle” camouflage pattern printed on one side, with a three colour brown dominant “beach” pattern printed on the opposite side. Produced in a variety of uniform styles as well as some articles of field equipment, the pattern was most widely utilised by the USMC in the Pacific Theatre (although it did see very limited usage by the US Army operating in the ETO). It was also used extensively during the Korean War

In 1948, John Hopkins, chief designer of camouflage at the US Army Engineer Research and Development Laboratory (ERDL) in Fort Belvoir, Virginia, designed a general purpose jungle camouflage consisting of mid-brown & grass green organic shapes with black branches on a lime green background, this pattern eventually became known as the ‘ERDL’ or ‘leaf’ pattern, although at the time it was quickly shelved. In 1953 eight camouflage uniforms (mostly hand-painted) were trialled in Panama. One pattern, called ‘flock’, was found to be very effective but was never issued. The trials did produced two additional camouflage patterns however that were immediately issued for use by military personnel. Both patterns saw widespread distribution but only as a reversible shelter half (1953) and a reversible helmet cover (1959), with a different pattern printed on each side. On one side the USMC "Standard" or “wine leaf” (sometimes called "vine leaf") pattern, consisting of large overlapping dark green, lime green & ochre leaf shapes with brown twigs on a pale green background and on the other, the brown Mitchell 'cloud' pattern. 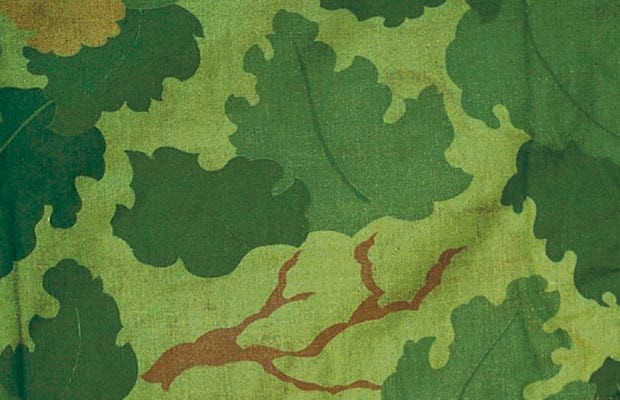 Mitchell is often used to erroneously describe the "jungle" or 'leaf" side when it should only be applied to the "cloud" pattern. Helmet covers displaying the 'Standard' pattern are pervasive throughout photography from the Vietnam War, however clothing utilising this pattern was much rarer. Garments were either very rare experimental pieces or usually tailor made in Okinawa or locally in South Vietnam from half shelters or Asian made fabric copied from the US design. 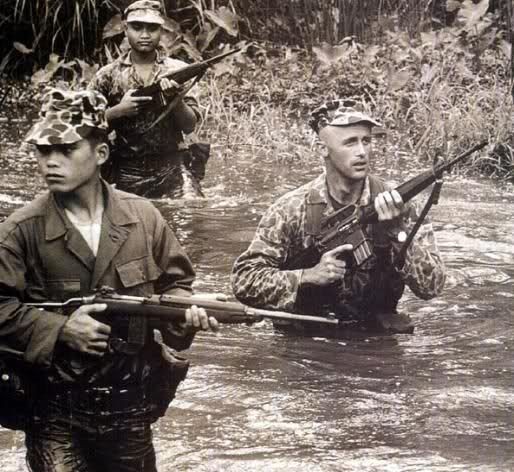 Between 1954 and 1962 the US Marines provided a small advisory group to work with the South Vietnamese Marine Corps. Headquartered in Saigon and under the operational control of MACV Naval Advisory Group, early advisors deployed to Southeast Asia quickly realised their issued uniforms were inadequate for serving in the extremely warm and wet tropical climate there. They sought out more suitable clothing for use in conducting reconnaissance and ambush operations, this led to the procurement of commercially-produced items, as no US military equivalent was available at the time. Based on the original US M1942 jungle spot camouflage pattern, lighter weight hunting uniforms made by American and Asian retail companies - nicknamed "duck hunter" or "Beo-Gam" camouflage - were obtained privately by unit commanders and also supplied to indigenous units as part of the CIA-sponsored CIDG program. 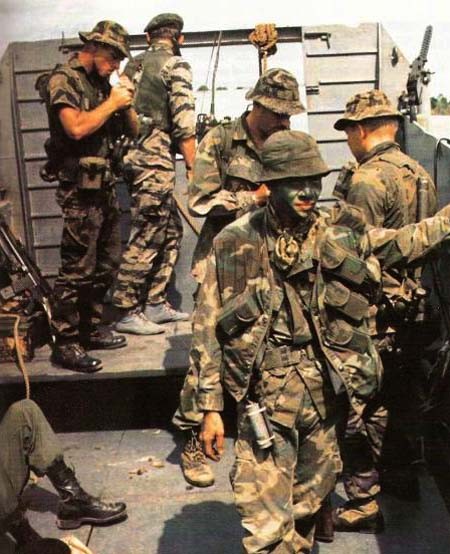 In 1962, during this early period, the ERDL pattern was revived for testing and several hundred ERDL tropical combat uniforms were sent to Vietnam for evaluation by USARV in 1966. In 1967, ERDL camouflage tropical uniforms began seeing service with reconnaissance and Special Forces personnel. The uniforms were also highly favoured by the US Marines, and Australian and New Zealand special forces teams deployed there. The original ERDL pattern was predominantly green printed on a cotton poplin fabric with later versions were printed on a new "ripstop" poplin fabric. The green dominant design is often labeled a "lowlands" pattern, referring to its suitability as camouflage in the lush, lowland regions of Southeast Asia. A later predominantly brown version is usually referred to a "highlands" pattern, due to its application as camouflage in the rocky, mountainous regions. Printing of the ERDL pattern was often inconsistent, with rollers frequently experiencing slippages that resulted in overprinting of one or more colours, leaving a shadow-like or "blurred edge" outline to many of the shapes in the design.

Subsequently, the ERDL pattern would go on to eventually evolve into Woodland pattern, one of the most duplicated and modified camouflage patterns ever designed, seeing service with military forces around the world and continuing to be worn today.