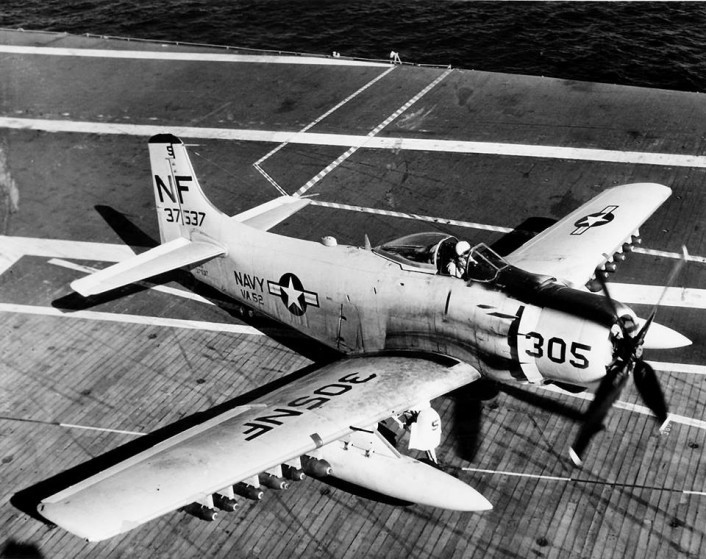 The last US Navy propeller attack aircraft to disappear from the decks of the flat tops was the Douglas AD Skyraider. This aeroplane had a unique capability: even when it carried its full internal fuel of 2,280 pounds, a 2,200 lb torpedo, two 2,000 lb bombs, 12.5 inch rockets, two 20 mm guns and 240 pounds of ammunition, the Skyraider was still under its maximum gross weight of 25,000 pounds.

Entered in service just in time to take part in the Korean War, the Skyraiders in the improved A-1H version were quite slow; nevertheless in spite of performance not even comparable to those of the other assets in the Air Wing’s strike group, the propeller-driven attack aircraft managed to shoot down two MiG-17s during the early part of the Vietnam War.

In fact, some of the most unusual kills of the conflict did not come from the F-4s, F-105s, or F-8s but from the Korean War era piston-engine Skyraiders, thanks to the four M3 20 mm fixed forward-firing cannons capable of firing 800 rounds per minute, that fitted the A-1Hs.

The first of these victorious engagements took place on Jun. 20, 1965, when a flight of Skyraiders from the Strike Squadron 25 (VA-25) Fist of the Fleet, took off from the USS Midway (CVA-41) supporting the rescue of a downed USAF pilot in the northwest corner of North Vietnam were attacked by a flight of MiG-17s. The two enemy jets launched missiles and fired with their cannons against the two A-1Hs, but both Skyraiders’ pilots, Lt. Charles W. Hartman III, flying A-1H BuNo 137523, radio callsign “Canasta 573,” and Lt. Clinton B. Johnson, flying A-1H BuNo 139768, callsign “Canasta 577,” evaded them and manoeuvred to shoot down one of the MiGs with their 20 mm cannons.

Lt. Johnson described this engagement in Donald J. McCarthy, Jr. book 'MiG Killers' as follows: “I fired a short burst at the MiG and missed, but got the MiG pilot’s attention. He turned into us, making a head-on pass. Charlie and I fired simultaneously as he passed so close that Charlie thought I had hit his vertical stabiliser with the tip of my tail hook. Both of us fired all four guns. Charlie’s rounds appeared to go down the intake and into the wing root, and mine along the top of the fuselage and through the canopy. He never returned our fire, rolled, inverted, and hit a small hill, exploding and burning in a farm field.” The subsequent MiG kill of this engagement was shared by both Hartmann III and Johnson.

The second victory of the propeller-driven Skyraider against a North Vietnamese MiG-17 jet fighter, took place on Oct. 9, 1966 and involved four A-1Hs launched from the deck of the USS Intrepid (CV-11) in the Gulf of Tonkin flying as “Papoose flight.”

The flight was from the Strike Squadron 176 (VA-176) Thunderbolts and it was led by Lt. Cdr. Leo Cook, with Lt. Wiley as wingman, while the second section was led by Lt. Peter Russell with Lt. William T. Patton as wingman. It was during the RESCAP (the REScue Combat Air Patrol, a mission flown to protect the downed pilots from ground threats) flight, that the “Spads” (as the Skyraiders were dubbed by their pilots) were attacked by four MiG-17s. This engagement ended with one Fresco confirmed as being shot down, a second as probably shot down and a third heavily damaged.

According to McCarthy, the MiG-17 kill was awarded to “Papoose 409,” the A-1H BuNo 137543, flown by Lt. Patton who, after having gained a position of advantage on one of the MiGs, opened fire with his four guns, hitting the tail section of the enemy jet. Patton followed the MiG which descended through the cloud deck and when Papoose 409 emerged from the clouds he spotted the enemy pilot’s parachute.

The U.S. Navy Skyraiders last combat tour took place from July 1967 to 1968 onboard USS Coral Sea (CV-43), but this versatile propeller aircraft continued to fly with the U.S. Air Force and with the Vietnamese Air Force until the end of the conflict thanks to its unparalleled capabilities in close air support.