Only son of a ladiesman 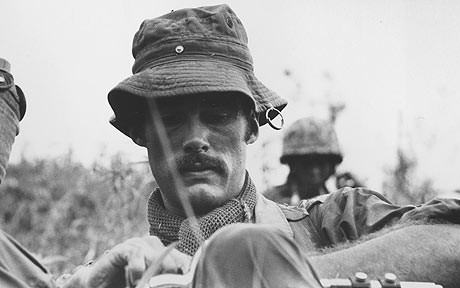 One of the lesser known photojournalists in Vietnam was actually the son of Hollywood royalty. Sean Flynn was the only child of the marriage of Errol Flynn and Lili Damita. After studying briefly at Duke University, Flynn abandoned a lukewarm film career to join a band of intrepid journalists documenting the civil wars in Vietnam and Cambodia. At first, Flynn drew international attention merely by virtue of being the even-more-handsome son of his movie-star father entering a combat zone. He and his colleagues' brazen lifestyle and daring work in the field became the stuff of legend and inspired a cast of colourful characters in war films and literature. More significant, their photos, shot within the frenzied theatre of combat, became pivotal in exposing Americans at home to the brutality and ambiguous profit of their military's involvement in the region.

In March 1966, Flynn was wounded in the knee while in the field. In mid-1966, he left Vietnam long enough to star in his last movie. He returned to Vietnam and made a parachute jump with the 1st Brigade, 101st Airborne in December 1966. In 1967, he went to Israel to cover the Arab Isreali War. He returned to Vietnam in 1968, after the Tet Offensive, with plans to make a documentary about the war. He went to Cambodia in early 1970, when news broke of North Vietnamese advances into that country.

The 1970-75 conflict in Cambodia, a spillover of America's war against the North Vietnamese, pitched the US-backed government headed by Lon Nol against Khmer Rouge insurgents supported by the government in Hanoi. The war was eventually won by the Maoist-influenced Khmer Rouge forces, which then put in place a murderous four-year regime that caused the death of up to 2 million people.

On April 6, 1970, Flynn and a group of journalists left the city of Phnom Pehn to attend a government sponsored press conference in Saigon. Flynn and fellow photojournalist Dana Stone (who was on assignment for CBS news) chose to travel on motorcycles instead of the limousines that the majority of the other journalists were traveling in (the limousines had been previously used by tourists before the journalists took them over). Reporter Steve Bell, who was one of the last Westerners to see the two alive, later said that after the press conference, Flynn and Stone had gotten word that there was a checkpoint on Highway 1 manned by members of the Viet Cong. Eager to get a photograph of the Viet Cong, Flynn and Stone decided to set out on Highway 1 alone. Before they left, Bell snapped the last photo ever taken of Flynn and Stone. They were never seen or heard from again and their remains have never been found.

"Afterwards we all headed back to Phnom Penh, but they said they wanted to go forward. They had heard there was a checkpoint that was manned by the Viet Cong. It was thought that you could see the Viet Cong there," said Mr Bell, who took a photograph of the two men as they set off on what would be a final journey. "We headed back to Phnom Penh and no one ever saw them again... I think they were among the first to go missing. It had not reached the point where we knew quite how dangerous it was." 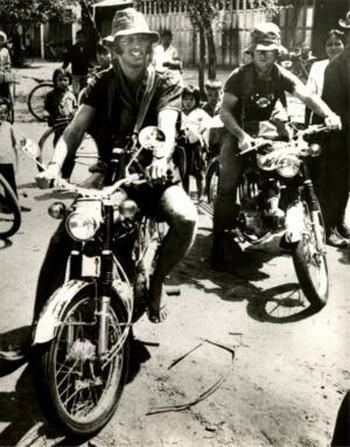 Flynn's mother spent an enormous amount of money searching for her son, with no success. In 1984 she had him declared legally dead. In March 2010, a British team searching for Flynn's body thought they had found it, when they uncovered the remains of a Western hostage allegedly executed by the Khmer Rouge.Tests results on the human remains found at the grave site in eastern Kampong Cham province, Cambodia, were released on June 30, 2010, and they were found not to be the remains of Sean Flynn. Lt. Col. Wayne Perry of the Joint POW / MIA Accounting Command said there was no match between DNA from the recovered remains and DNA samples they had on file from the Flynn family.

The story of Sean Flynn was immortalised by The Clash in the song "Sean Flynn" from the album Combat Rock. He also has a prominent role in Michael Herr's book about his experiences as a war correspondent, Dispatches.

Combat photographers and correspondents played a vital role during this time, changing public opinion and creating a groundswell of anti war sentiment. But their contribution was not without cost: at least 37 journalists were killed or went missing in Cambodia during the 1970-1975 war between the U.S.-backed military government and the North Vietnamese