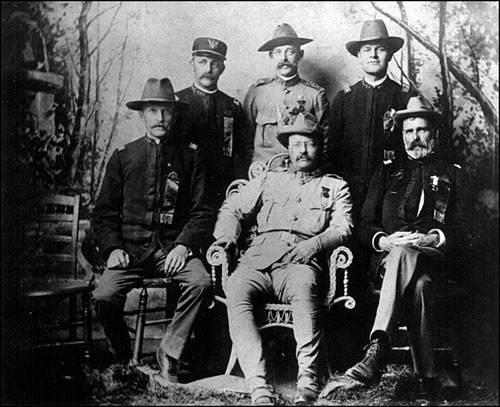 The term 'Rough Rider' was original coined to describe someone who could break or ride unbroken horses. Through time the phrase has been applied to everything from outlaw rustlers to a 1950's motorcycle club. The most famous application though is afforded to group of volunteer cavalrymen during the Spanish American War.

On May 6, 1898, Theodore Roosevelt resigned his post as Assistant Secretary of the Navy and volunteered to head a cavalry unit destined to fight in Cuba against Spain in the Spanish-American War. Eventually known as Roosevelt's Rough Riders, the 1st U.S. Volunteer Cavalry included cowboys and gamblers, hunters and prospectors, Buffalo soldiers, college boys, and Native Americans from all 45 states then in existence, four U.S. territories and 14 countries. Roosevelt was commissioned as a Lieutenant Colonel, with the 1st Volunteer Cavalry serving as a unit of the 1st Cavalry Brigade commanded by his friend, Colonel Leonard Wood, an army doctor who had won the Medal of Honor fighting Apaches in the 1880s. Although the unit’s official uniform was a slouch hat, blue flannel shirt, brown trousers and leggings, boots, and polka-dot bandanas, Roosevelt had his uniform tailored by Brooks Brothers in Boston. 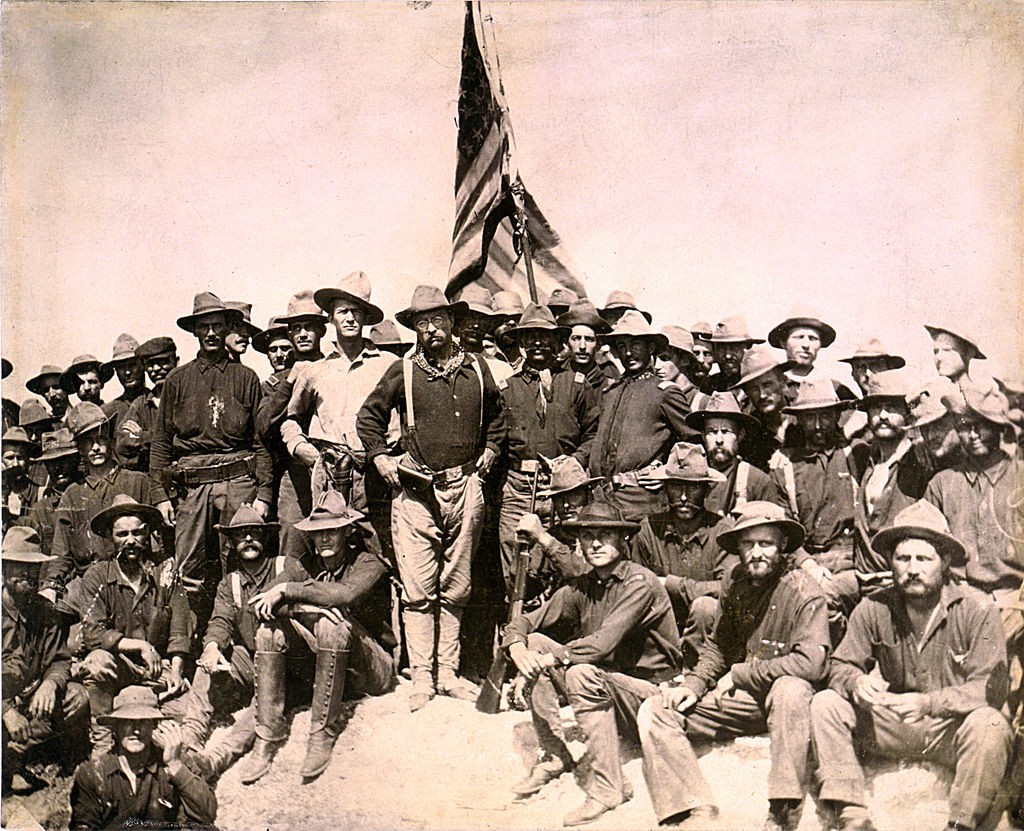 The Rough Riders, consisting of 1,060 soldiers and 1,258 horses and mules, trained at Fort Sam Houston in San Antonio, Texas. The troops departed San Antonio on May 29, 1898, via the Southern Pacific Railroad, en route to Tampa, Florida to await embarkation to Cuba. While awaiting orders to ship-out, the unit was stationed on the grounds of the newly constructed Tampa Bay Hotel, where Roosevelt and his wife, Edith, enjoyed a final visit together. After considerable logistical challenges during which most of the horses and Troops C, H, I and M had to be left behind, the Rough Riders on June 8, 1898 boarded the ship Yucatan and nearly two weeks later on June 22, 1898 finally disembarked at Daiquiri, Cuba, on the southeastern side of the island near the strategically important port city, Santiago. On the eve of battle, Colonel Wood was promoted in the field to Brigadier General and Roosevelt to Colonel. June 30, 1898 proved to be one of the most significant in Roosevelt’s life. 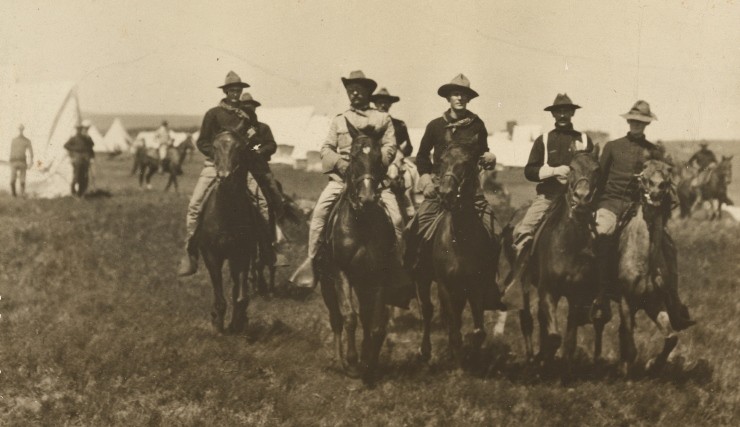 Assembled as part of the Army’s Fifth Corps to assault fortifications protecting Santiago, the Rough Riders were ordered to advance towards the San Juan River. As the troops neared the river, shrapnel from a Spanish shell hit Roosevelt in the wrist, and wounded several other Rough Riders and Army regulars. Wood then ordered the Rough Riders to follow the First Brigade and ford the San Juan River. In the stifling heat with temperatures above 100 degrees Fahrenheit, the Rough Riders moved out but the advance stalled and troops found whatever cover they could from enemy fire. Ordered to advance up Kettle Hill to support Army regulars, who were attacking nearby San Juan Hill from a different direction, Roosevelt, riding his horse Texas, exhorted his men to ride forward as he pressed on. The Rough Riders found themselves pushing the troops in front of them, and Roosevelt ended up leading the entire advance, which observers at the time thought had no chance of succeeding because there wasn’t sufficient troop strength and the Americans were facing well-entrenched Spaniards.

Still on Texas, Roosevelt advanced about 40 yards from the summit of Kettle Hill where there was a wire fence. Dismounting and releasing Texas, Roosevelt climbed through the fence and quickly reached the summit, along with his orderly, Henry Bradshar, and other Rough Riders and Ninth Infantry troops. Once there, the Americans found themselves under heavy Spanish fire and took cover in Spanish trenches and behind the sugar kettle for which the hill was named. Still, they managed to penetrate and keep up a steady fire on the Spanish line, eventually causing it to collapse. Roosevelt then ordered a charge and took after the Spaniards on adjacent San Juan Hill. But he didn’t realise that only five men followed, three of whom fell wounded within a hundred yards. The other two held their ground while an angry Roosevelt returned to the main line through the continuing fire and confronted his men for not following. In the heat of the moment, the troops hadn’t heard Roosevelt’s order nor seen him charging up the hill almost single-handedly. Now the charge became general and the troops cleared the Spanish trenches and kept a tenuous hold on both San Juan and Kettle Hills.

The Rough Riders lost 89 of 490 men killed or wounded in what came to be known as Roosevelt's Crowded Hour. Most experts agree that his personal valour and leadership were the single strongest elements leading to that day’s victory. The Rough Riders dug in on San Juan Hill, foraging for food and waiting for a counterattack, which never came even though the Spanish kept up a steady fire. Roosevelt and his men held their position in the uneasy siege of Santiago until July 10, when they were ordered to guard the El Caney Road. The Spaniards surrendered on July 17. After the armistice, the Rough Riders returned to the U.S. and on August 14 disembarked at Montauk Point, New York, where they were quarantined until being mustered out of service on September 15, 1898. In the four and a half months the Rough Riders were together, more than one-third were killed, wounded, or stricken by disease, giving them the highest casualty rate of any American unit that took part in the Spanish-American War.