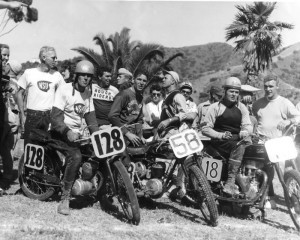 From 1951 to 1958, legendary Motorcycle racers including Bud Ekins, Ed Kretz Jr. and Jack Thurman competed in the Catalina Grand Prix, an on/offroad event that saw riders racing through the streets of the port city of Avalon and out onto fire roads and horse trails in the surrounding hills. In its day, it was among the most anticipated races of the year.

Inspired by the U.K.’s historic Isle of Man TT, the two-day Catalina Grand Prix included a 60-mile race for bikes up to 250cc and a 100-mile race for larger machines. Races were 10 laps, with the 60-miler running a six-mile course and the 100-miler a 10-mile course. 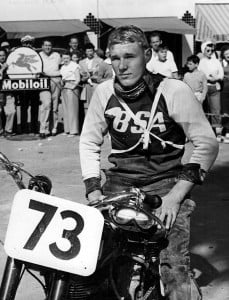 In 1957, 150 riders lined up for the 60-mile race, while another 199 watched the flag drop to start the 100-mile race. Fans loved the event, and in its last year, 1958, it’s estimated some 7,000 people took the Catalina Ferry from Los Angeles to Catalina Island to take in the racing action.

British bikes were very popular in the Catalina races, thanks no doubt to their light weight and high performance, with Triumph and BSA particularly well represented; 66 of the 199 starters in 1957’s 100-mile race were on Triumphs and 48 on BSAs. 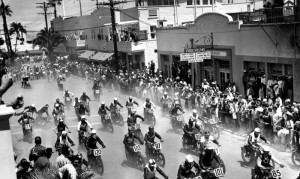 The race’s prominence prompted BSA, whose first big win at the island came in 1952, to introduce the Gold Star-based Catalina Scrambler in 1956. Fittingly, BSA won the 1956 event — after the Catalina Scrambler had been added to its lineup. BSAs nabbed four of the top 10 Open Class slots in the final 1958 race — including first.

Many of the AMA’s best motorcycle racers, local SoCal riders and Motorcycle Clubs including The Checkers, Shamrocks, Rough Riders and Dirt Diggers mixed with Hollywood actors, stunt riders, and thrill-seekers– all converging on the tiny vacation island from 1951 – 1958 for an event like no other.

“So, what happened? There are several reasons as to why they terminated this race. One of the reasons is that money commitment to cover the costs of the programs didn’t show up. After all, can’t have a race without a program. Another was actor Lee Marvin trying to incite a mutiny from the fantail of the homebound steamer. Marvin never needed a microphone even when shouting against the wind and it was all in jest anyway. But the Captain took Lee seriously enough to strap on a sidearm and stand on the bridge. The ship was escorted to the dock by the Harbor Police. Marvin had some explaining to do. Probably the most damaging was when Waikiki Bar owner Mel Porter closed up Saturday night and was mugged on his way home by several scum bags. Mel didn’t take kindly to this treatment and the Chamber of Commerce decided no more races. They chose the wrong person, Mel was the Mayor of Avalon.”  –Dave Ekins