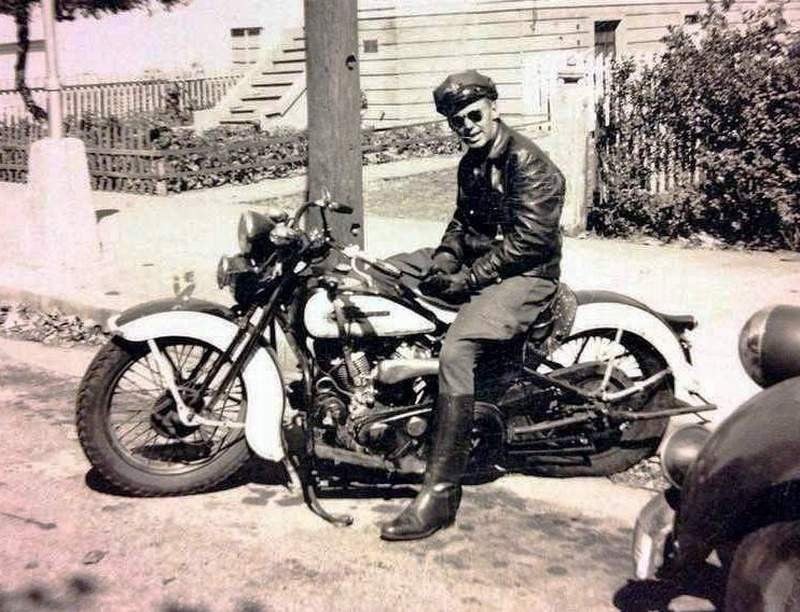 In 1953 a black leather-jacketed Marlon Brando slouched across the screen in The Wild One, his motorcycle jacket’s mixture of animal magnetism, brooding menace, and sexual provocation made it a must-have for hipsters, rebels, and fashionistas around the world. The movie opens with an iconic sequence, tiny blurs on the horizon and a low rumble turn into figures of 40 black leather-jacketed bikers who roar directly into the stationary, low-angled camera. The gang rides in a tightly-knit squadron formation, led by sideburned Johnny (Marlon Brando) Surly, sneering and rebellious, wearing the aforementioned black-leather jacket (with Johnny scrawled on the left chest), white T-shirt, denim jeans, boots and a Police issue hat and sunglasses of the era, the implication being that this badass biker had stolen them from an officer in some previous altercation.

While the leather jacket has its roots among World War I aviators, along the way, every generation and subculture — including motorcycle clubs, beats, punks, movie stars, and counterculturists - has made the leather jacket their own. Part of this mystique can be traced back to a specific unit of California Policemen whose uniform created a visual language that bordered on iconography - the California Highway Patrol. Created in 1929, the CHP had Statewide authority to enforce traffic laws on county and state highways, a responsibility that remains in effect today, along with many additional functions. During it’s first ten years the Patrol successfully grew into a highly respected, effective traffic safety force of 730 uniformed personnel. In 1947 the CHP became its own department and the span of responsibility increased. 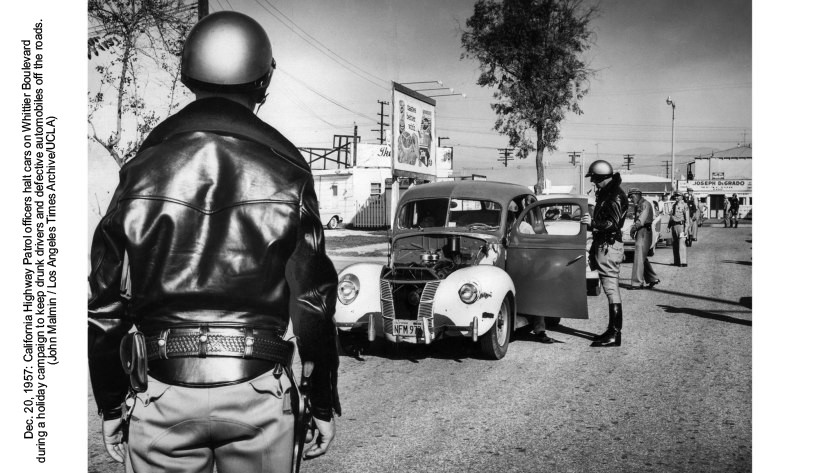 The CHP's iconic uniform is traditionally khaki coloured with a campaign hat and blue-and-gold trouser stripe. Motorcycle officers, referred to as Motor Police, also wore the prerequisite attire of leather jackets when climate dictated, even in California in the winter it would be cold on bike all day and a leather jacket would be kept in their locker. The jackets were only allowed to be made by Police Dept approved makers and they always conformed to the same spec - albeit there were straight zip, and lancer zip variations. Each officer would go and order them personally from the approved jacket makers - just like officers in the military do. There is never a size label in CHPs jackets as they were custom-made for each officer. When we look at originals they come in a variation of shapes, sizes and quality - some are long and thin, some are short and wide for this reason. The Star Glove Co was one of the better makers, their jackets are always beautifully sewn and the hide choice is excellent. The one consistent factor in CHP jackets is that they were all adorned with the famous CHP gold 7 point badge, each point representing Character, Integrity, Knowledge, Judgement, Honour, Loyalty and Courtesy respectively. The leather jackets afforded the officers an effortless cool usually associated with rebels and not law enforcement. Soon, the CHP motorcycle cops had garnered the allure of the modern day cowboy or knight, riding metal steeds and saving the day. It wasn’t long before Hollywood latched onto this ambiguity of a cool looking cop, enforcing the law but dressed in the uniform of the rebel. 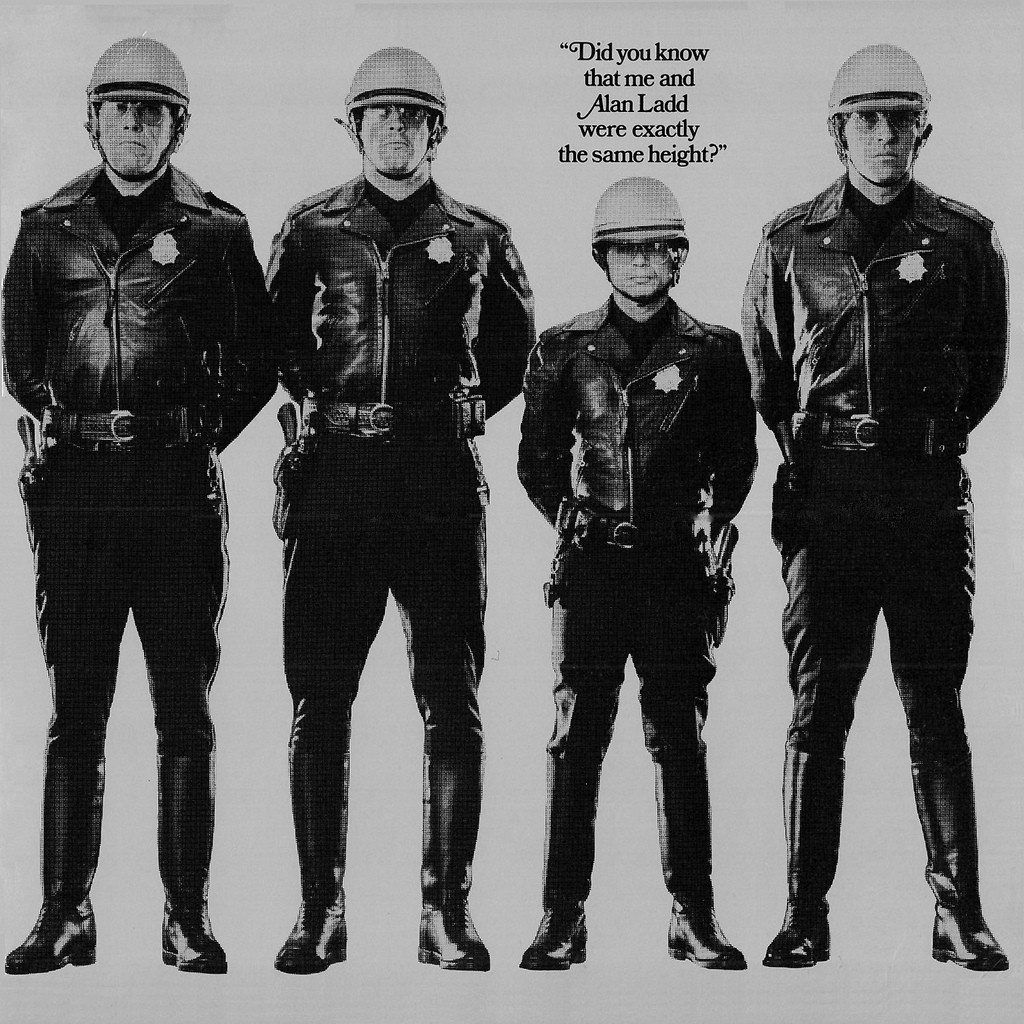 The early 70s represents a utopian Hollywood in which rebels didn't just infiltrate the backlots, they damn near took it over. The ascent of the hippie movement and the rise of the film-brat generation intertwined and overlapped considerably, a great example of this is 1973's masterful Electra Glide In Blue. Wrongly perceived as right wing upon its Cannes première, it arrived at a time when law enforcement battled President Nixon for bragging rights as the counterculture's top boogeyman. The movie revolves around a straight-arrow cop who uses the iconic image of Peter Fonda and Dennis Hopper in Easy Rider as his target at the gun range. That audacious bit of provocation suggests that it be read as a moody answer to Easy Rider, but that description only scratches the surface of its iconoclastic genius. The main character is a sharply attired, diminutive Arizona motorcycle cop who longs to trade in his uniform for a detective's badge, and gets his chance when a recluse is killed on his watch. In his introduction to his sole directorial effort, producer-director-composer James William Guercio describes Electra Glide as a contemporary Western where the cowboys ride motorcycles instead of mustangs, in another parallel to Easy Rider. The leather jacket was a key device in conveying this to the audience. But the film arrived at a tumultuous time when the old divisions between cowboy and Indian, black hat and white hat, and villain and hero were becoming hopelessly blurred. In keeping with the zeitgeist, it's a thriller where solving the central crime seems somewhat irrelevant: Only thinly disguised as a cop movie, Electra is a profound and ultimately tragic meditation on identity, belonging, and the fickleness of the American Dream. It circles around genres only to dismantle and reassemble them in more truthful ways. The lead character's ironclad sense of morality alienates him from both his cop colleagues and the hippies who taunt him, Electra Glide occupies a strange, uncomfortable place in the cultural divide. Clean-cut fans of Westerns and cop movies were no doubt turned off by its ambiguity, deliberate pace, and lack of action, while hippies weren't about to embrace a movie about a heroic cop, no matter how artfully crafted. If had the hippies looked beyond Blake's uniform and haircut, they might have recognised a kindred spirit, a good-hearted and surprisingly open-minded outcast determined to live by his own moral code, no matter the consequences. 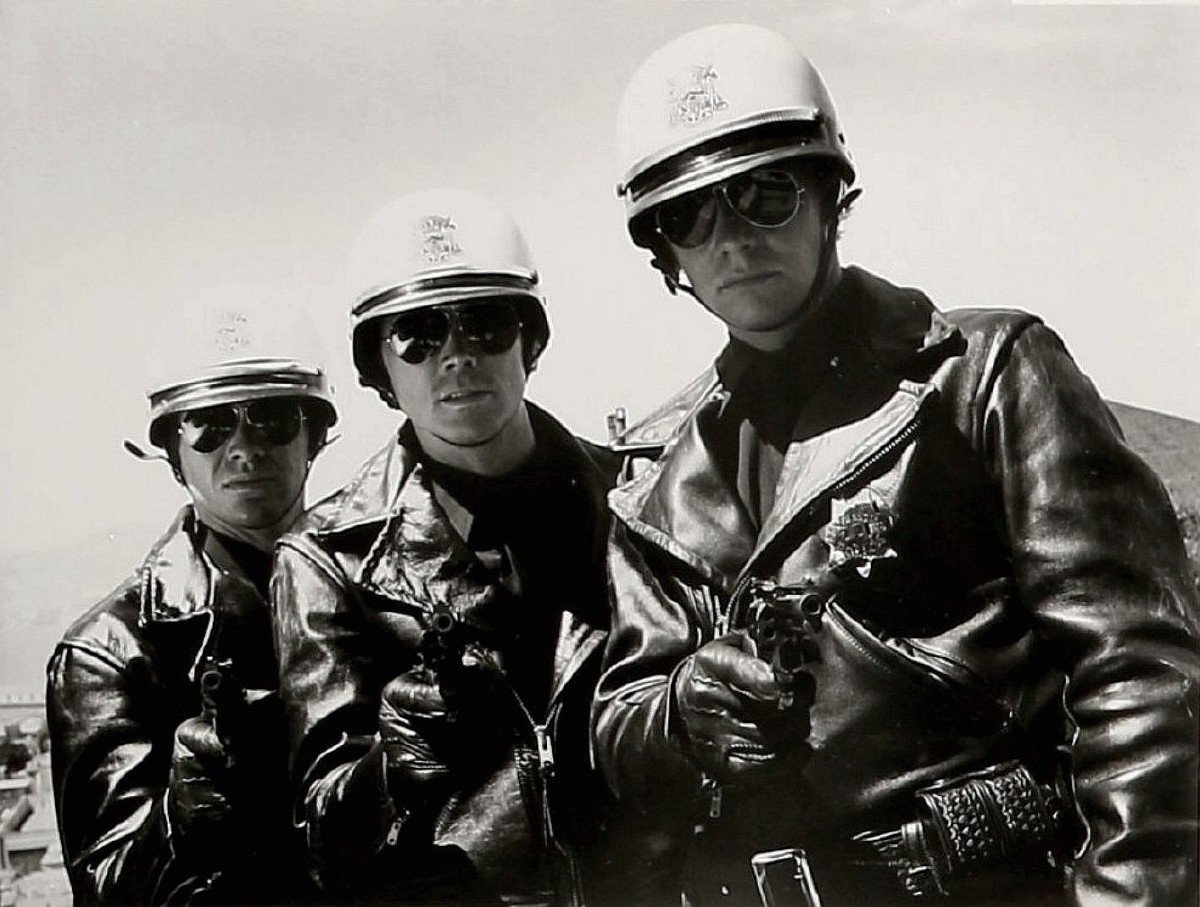 Magnum Force, the 1974 sequel to Dirty Harry arrived around the same time and similarly utilised the CHP's double entendre of cool. Director John Milius’ idea for a story wherein Harry’s commitment to police power would be tested by a cadre of rookie CHP bike cops who secretly assassinate mobsters, drug dealers, and murderers, along with people on the force who stand in their way was groundbreaking. While the script focuses on the blurred lines of morality in law enforcement, whatever it means to say thematically, on an aesthetic level the cop-as-rebel motif is reinforced throughout the movie. The vigilantes are all young, ex military, CHP Motorcycle cops, resplendent in black bike jackets and aviator shades, they look equal parts sharp and threatening, like steely automatons. Steeped in the iconography of the black leather jacket they make Eastwood’s character look positively dated. They walk the Brando Wild One line between outlaw and hero thanks to the ubiquitous uniform. This visual language was again utilised in the 1991 blockbuster Terminator 2, Robert Patrick's Terminator morphs into a CHP officer sporting the quintessential black motorcycle cop jacket and shades during the movie's chase scene.

We’ve captured this effortless cool in our ELMC Highway Star jacket. The jacket takes its silhouette and design features from the classic California Highway Patrol jackets of the 1940s. The flattering cut is neat and very easy to wear. No fuss details give it a lean look which fits any occasion. Buttoned tab cuffs, and matching tab side waist adjusters along with top yoked back give the garment the unmistakable 40s styling that makes this the 'dude' of all jackets. The garment is lined with custom-made EndZone Twill - a fabric we had exclusively produced - which is an extremely high quality luxurious hard-wearing material, that was originally conceived in the 1940s and used in the production of military flight jackets. It is a cotton-backed rayon fabric that has an incredibly dense weave construction giving it a super-slick handle which allows the garment to slide on and off the body effortlessly. The hide is an absolutely deliciously expensive 100% veg-tanned horsehide, in black, which we have had specially developed to exude all the character, handle and texture of those 1940s original garments. Trimmed with period vintage-style, leather thonged, metal zips, corozo buttons to cuffs and waist and a useful inside wallet pocket.Click HERE to view 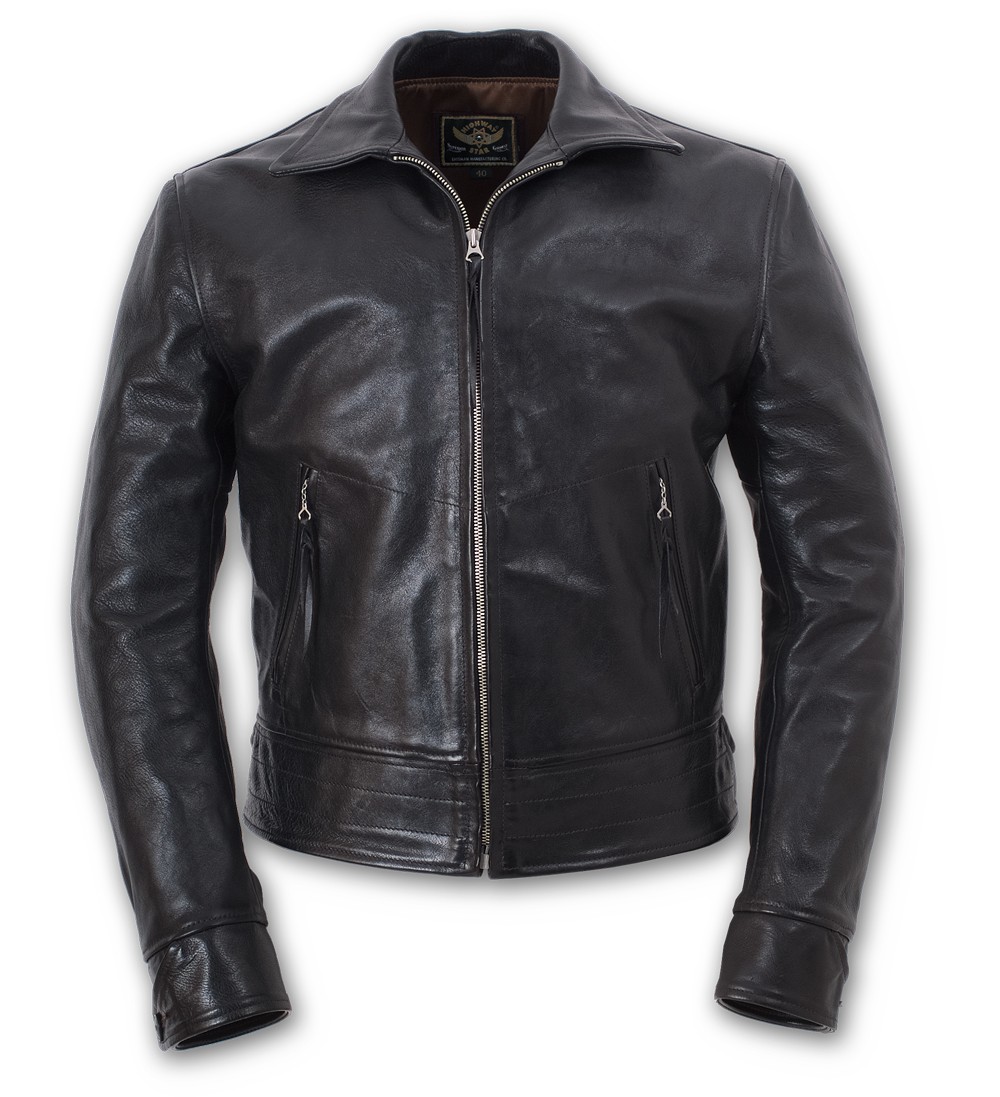