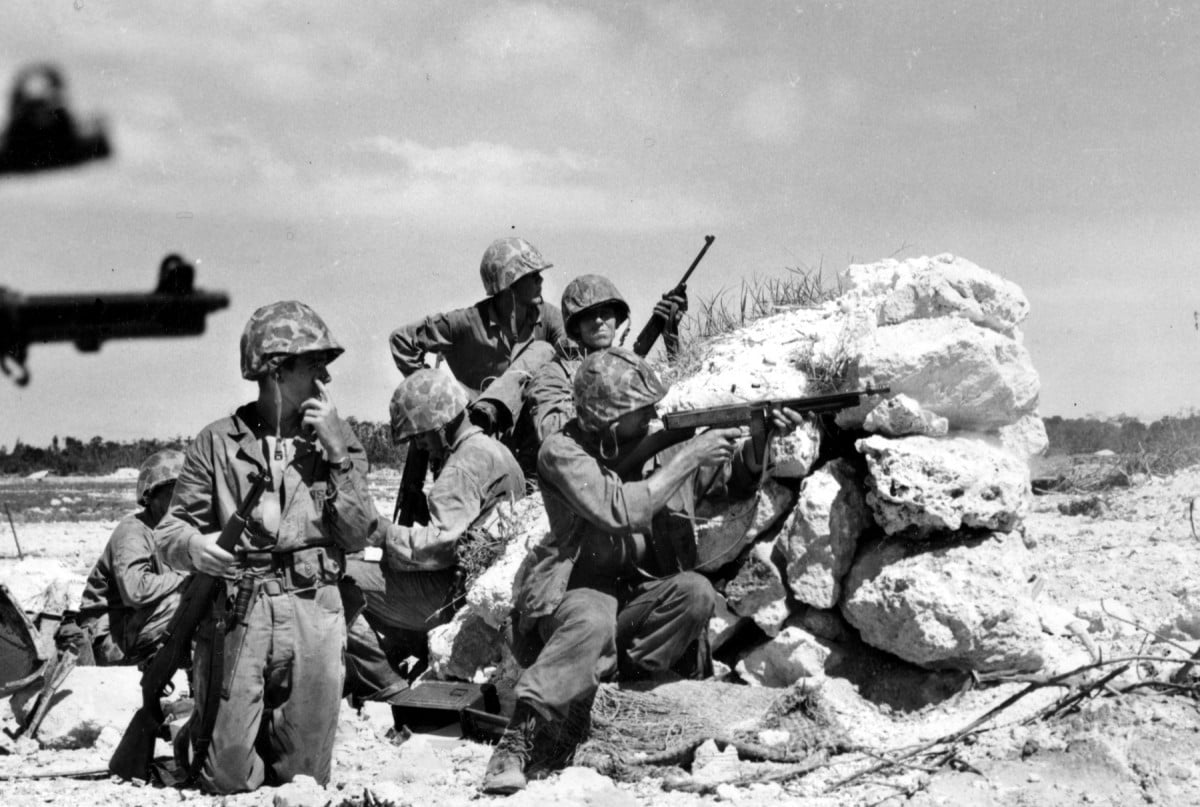 On August 7, 1942 at 0910 hrs the ramp of an American Landing Craft lowered into the surf of 'Red Beach' 6,000 yards east of Lunga Point on an obscure island in the Solomon Islands chain called Guadalcanal. The men of the 1st Marine Division who ran up the beach that morning had no idea they were beginning a bloody, six-month battle that would be the first United States victory on the ground in the Pacific theatre in the Second World War.

Deemed almost sufficiently trained for its first exposure to combat, the 1st Marine Division, after traveling via train to San Francisco, boarded the transport USS John Ericsson, which carried them to Camp Paekakariki outside Wellington, New Zealand. Upon arriving in Wellington in July, the Marines were scheduled for another six months of training, but those plans were quickly cancelled. It was there that the Marines learned they would take part in the first land offensive against the Japanese on Guadalcanal. An airfield there was 90 percent complete, and the U.S. Joint Chiefs of Staff in Washington, D.C., did not want the Japanese to finish it. The official history said, “They feared that the establishment of such a base might presage a thrust southeastward that would sever the line of communications between the United States and Australia, and plans were quickly changed to focus the counteroffensive on the seizure of Guadalcanal and Tulagi.” The invasion force was assembled in such haste that the Marines had only enough food for 60 days and enough ammunition for 10 days of heavy fighting.

The first three major land engagements on Guadalcanal would all involve the same objective of trail or road access to Lunga Airfield, the island’s airstrip. The division departed Wellington and steamed to the Solomon Islands for Operation Watchtower. At 4:30 am on August 7, 1942, the Marines were awakened on board ship, and a hot steak and eggs breakfast was offered to those who had the stomach for it. A fierce naval bombardment commenced, hitting Guadalcanal and the smaller nearby island of Tulagi, as well as two small islets, Gavutu and Tanambogo. The Marines’ landings that morning caught the enemy by surprise and with a small force; only after their airfield was complete did the Japanese plan to bring in large numbers of crack troops to Guadalcanal. The invasion force was split into two groups. The 1st and 5th Marine Regiments came ashore first at Red Beach. McKelvy’s 3rd Battalion, which included the four second lieutenants of K Company, was in the third wave to hit the beach. Colonel Merritt Edson and his Raider Parachute Battalions, with the 2nd Battalion of the 5th Marine Regiment, faced suicidal resistance on Tulagi and its two islets, a foreshadowing of the fierce fighting to come on Guadalcanal. But the Tulagi islet areas were secured by the second day. 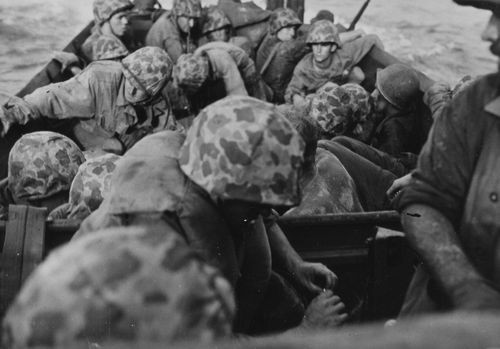 After hitting the beach at Guadalcanal on August 7, the Marines of K Company, along with the rest of the 3rd Battalion, were ordered to seize a terrain feature known as the Grassy Knoll (aka Mt. Austen). At an elevation of 1,000 feet, it overlooked the airfield and part of Guadalcanal’s coast and was therefore an ideal tactical acquisition. The Marines soon found out it was three miles inland, rather than just one mile as their maps indicated.

The Marines, however, did manage to capture the Lunga Airstrip, along with its warehouses and construction equipment that was quickly deployed to finish building the airfield. After taking the airstrip, the Marines promptly renamed it Henderson Field in honour of Major Loftus Henderson, a Marine Corps aviator killed in the Battle of Midway. The warehouses contained Japanese food - canned crab, fish heads, and rice - that had been contaminated by worms. Third Battalion Doctor Ben Keyserling passed by the chow line, administering the malarial depressant Atabrine and advising the Marines not to pick the worms out of their rice. “It’s going to be the only protein you get, so leave them in there,” he said. Also captured were large amounts of Japanese whisky and saké. Lt. Col. McKelvy immediately ordered the alchol off limits to everyone except (no surprise) himself. His men remember him being a bit tipsy at times.

The Marines' good fortune did not last long. On the evening of August 8, Rear-Admiral Frank Fletcher decided to withdraw the three aircraft carriers that were providing air cover for Vandegrift's transports. Later that same night, a Japanese cruiser task force sank one Australian and three American cruisers in the waters near Guadalcanal. The naval battle would come to be known as the Battle of Salvo Island and it was the first of a series of clashes to decide the control of the sea around Guadalcanal. In the next six months the United States would lose two aircraft carriers, seven cruisers and 14 destroyers while the Japanese lost one aircraft carrier, two battleships, four cruisers and 11 destroyers. The transports fled the next day taking with them 3,000 Marines who had not had time to disembark and much of the division's ammunition and heavy artillery. Another 6,000 men of the 1st Marine Division were dug in on Tulagi Island 20 miles away. The 10,000 Marines on Guadalcanal were on their own.

The campaign was a race between the Marines and the U.S. Army and the Japanese Imperial Army to concentrate enough force to defeat each other. The difficulties of gathering those troops were compounded by the alien and hostile environment of the jungle on Guadalcanal. But the day before the first 12 Douglas Dauntless dive-bombers and 19 Grumman Wildcat fighters arrived, the Japanese launched their first counter-attack. On August 20, 1,000 soldiers led by Colonel Kiyono lchiki attacked Marine positions on the left flank at the mouth of the llu River. But the Japanese underestimated the American strength, a mistake they would repeat several times in the campaign. Thinking there were only about 2,000 Marines on the island, lchiki's men attacked in three waves and were mowed down by the 2nd Battalion of the 1st Marine Regiment. More than 800 Japanese were killed and lchiki committed suicide. 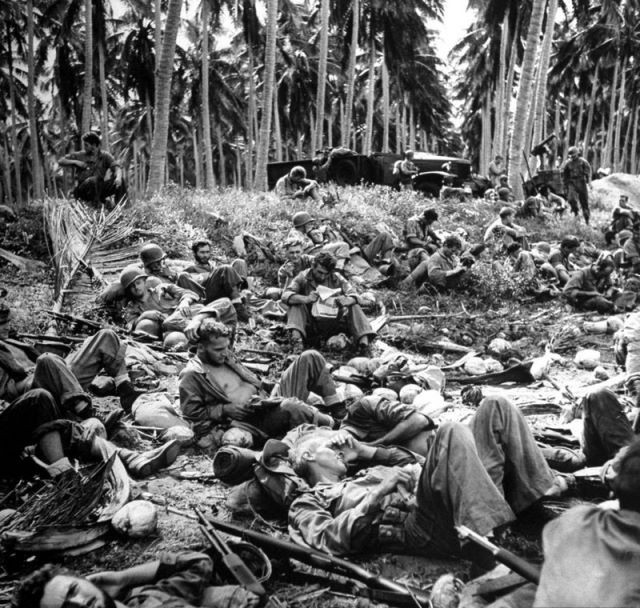 The Japanese brought more soldiers to Guadalcanal on destroyers that travelled only at night to avoid the planes on Henderson Field and by September 12 had assembled a force of 3,000 men. Major-General Kawaguchi attacked from the south across a hill that became known as Bloody Ridge because of the intense fighting on the slopes. Colonel Merritt 'Red Mike' Edson's elite Raider battalion and parachute battalion bent under the assault, suffering 40 dead and 103 wounded, but did not break. Kawaguchi was not so fortunate and lost 600 killed and 600 wounded in two nights vicious fighting. On October 9, the Japanese made a third and final attempt to drive the Marines into the sea when Lieutenant-General Harukichi Hyakutake gathered a new force of 20,000 men plus heavy artillery and planned to strike at the American centre and right simultaneously. but the terrible terrain made exact co-ordination between the two columns impossible and they attacked 24 hours apart.

That might not have been fatal except the Marines had received their own reinforcements in the weeks before the attack. More Marines and the U.S. Army's 164th Regiment brought American strength on Guadalcanal up to 23,000 soldiers. In addition, a second airstrip was built for fighter planes. Hyakutake attacked and was slaughtered on the American defences. On December 9, the battle and jungle weary 1st Marine Division was withdrawn and in its place were the Americal Division and the 25th Division, both army formations, and the 2nd Marine Division for a total of 50,000 men under Major-General Alexander Patch. Hyakutake had less than half that number and a critical shortage of supplies left his men weak and sick. In January of 1943, Patch fought his way down the length of the island, overrunning Hyakutake's headquarters on the 23rd of that month. The Japanese managed to evacuate 13,000 soldiers by night and the campaign ended on February 8, 1943. In total, the United States lost 5,600 casualties of which 1,500 were killed while the Japanese lost an estimated 24,000 dead.

The new Eastman 1st Marine Division t shirt celebrates the grit and courage of these men, an exact reproduction, researched, developed and manufactured in Japan by the best in the business. Constructed with a special thread called ‘Raffy’, which is a combination of American Supima cotton, Egyptian cotton and Turfan cotton, it replicates the look and feel of vintage fabric. Because these cottons all have different length staples, the thread has a distinctive texture that is similar to vintage fabric. This specialised thread is then woven on rare vintage circular knitting machines, so the body is a complete tube with no side seam, known as ‘body-size’ - just like the originals. Finally, the dying and sewing construction is impeccably matched to the original, rendering a recreation that is second-to-none.