The Roots of Hot Rodding 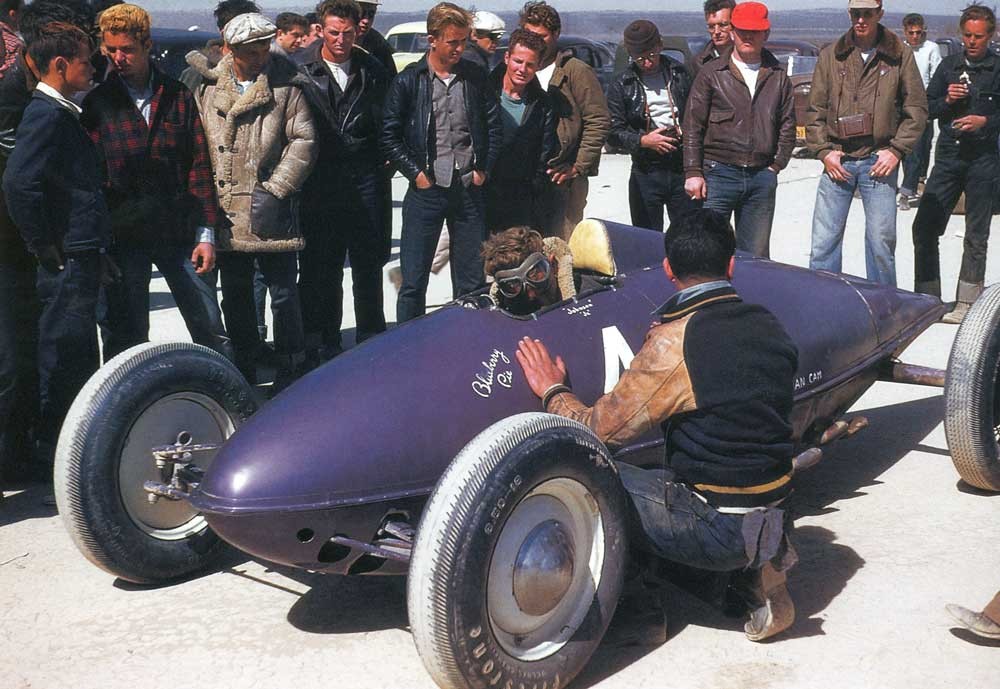 World War II changed the world and laid the foundation for the American car-crazy phenomenon that exploded in the 1950s - Hot Rodding. Once the hostilities in Europe and Asia had ceased, those lucky enough to make it back wanted to enjoy living the way they couldn't while serving Uncle Sam. Finally home, ex-GIs couldn't get enough of cool cars, all-American burgers and fries, and the girl next door who had grown up since they left. Building a hot rod or custom car was a method of self-expression, and for many, the cars provided the means for the social life they desired.

Many GIs also found it hard to let go of the adrenaline rush of enemy action. Something inside them yearned for a little bit of that thrill, but without the potential wartime consequences. Getting behind the wheel of a cool hot rod or custom car fulfilled those conscious and unconscious desires. And with many coming back from the war with some money saved and a job waiting, they had the means to acquire what they wanted.

The timeline for hot rods and custom cars starts before World War II. Teens itching to tinker with cars and go fast were racing cheap Ford Model T's on Southern California's dry lakes and street racing in Los Angeles even in the 1920s. The Harper, Muroc, and El Mirage dry lakes -- all 50 or so miles north of Los Angeles -- saw racing activity from the '20s up to World War II. Racing at El Mirage continues today. 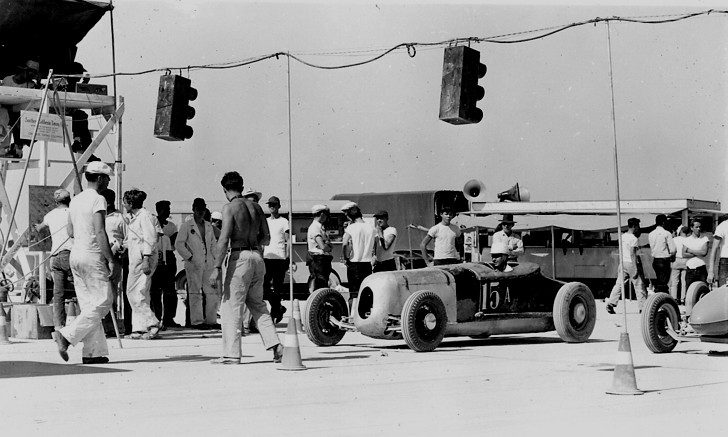 Speed junkies could jump in their hopped-up, chopped-down Model Ts and be at one of the dry lakes in less than three hours. Or, if the need was urgent, they could find a deserted back road or open field. At the lakes, the cars were timed with handheld stopwatches and placed in a class determined by the resultant time. The vast majority of the cars being run were four-cylinder Ford Model Ts or their successor, the four-cylinder Model A. The cars were cheap, plentiful, lightweight, and easy to work on. They responded to simple "hop ups" like higher compression, ignition and timing adjustments, additional carburettors and more radical cam grinds.

The drill was fairly simple: Buy the nicest roadster you could find (because roadsters were the lightest); strip off everything not needed to go fast, like the fenders, headlights, hood, and top; find some cheap used tires to replace your bald ones or to mount over your existing tires for a little extra tread; and go racing. Paul Chappel's Speed Shop on San Fernando Road in Los Angeles and Bell Auto Supply in neighbouring Bell were the first stores in the country devoted exclusively to supplying speed parts for those who wanted to run with the fast pack. Performance parts included high-compression heads, exotic overhead-cam conversions, and radical cams (also called "sticks").

The Ford flathead V-8 was born in 1932 and with it a new opportunity to go fast. Though slow to be accepted by hot rodders, more 65- and 85- horsepower flathead V-8s found their way into junkyards as the '30s progressed and thus began the transformation from four-bangers to flatheads. Also released in 1932 were the lightweight '32 Ford or "Deuce" frame and roadster body. The combination was unbeatable in terms of performance potential and looks. To this day, a flathead-powered Deuce roadster is the quintessential hot rod. That engine and frame combination would also provide an excellent foundation for many types of bodies, or sometimes hardly any body at all.

As interest in racing grew, kids began to try out their "gow jobs" more often on public streets. What was mostly good, clean fun could get ugly -- and it often did. "Speed contests," as the police called them, were occurring with greater frequency and more dire consequences. Casualties were described in detail in local newspapers, branding the hot rodder as a social menace requiring increasing control or, better yet, elimination. More hot rodders were finding the dry lakes a safer, less public alternative to racing on the streets. But this "detour" was having its own problems. Multiple casualties were reportedly occurring during the middle of the night on the dark racing courses of the dry lakes. Hot rodders ran unmonitored, without thinking that a like-minded racer could be coming from the other direction. The result was sometimes catastrophic.

Help was on the way, though. In 1937, the Southern California Timing Association was formed. The SCTA formalised classes, developed more sophisticated timing systems, and made racing safer and more organised. Then, in 1941, a monthly publication called Throttle Magazine was created to track racing results, feature some of the better cars, and report on new safety and speed issues. The scene was starting to gel, but after Pearl Harbor was bombed on December 7, 1941, and the U.S. became involved in World War II, hot rodding would have to wait. 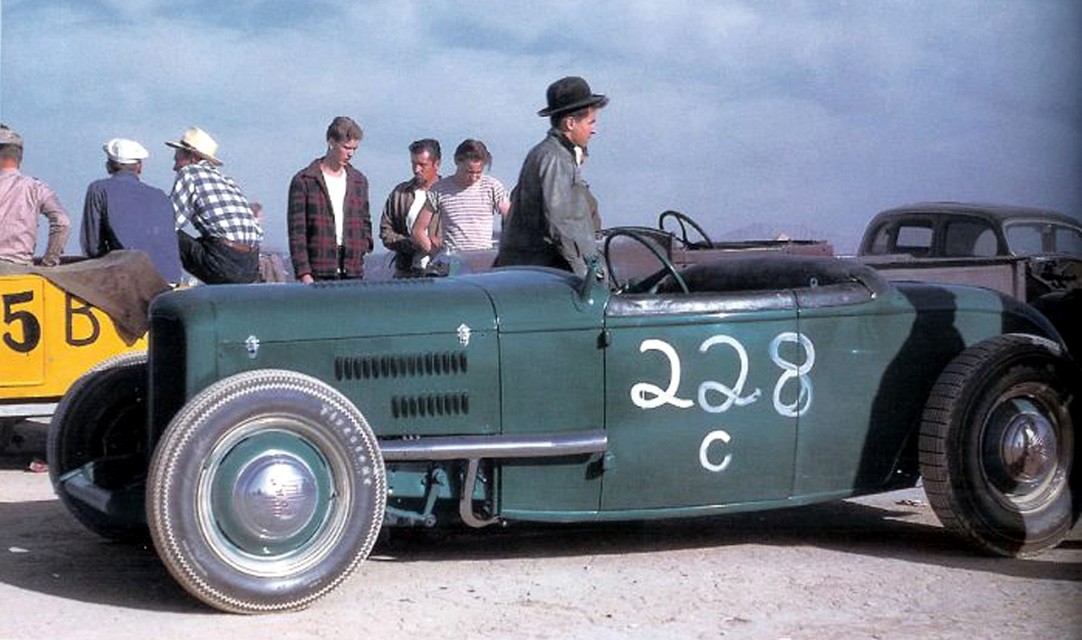 As the 1940s began, the hot rod and custom car fad continued to trickle down to car enthusiasts throughout the Los Angeles area. Now it involved older used cars that were transformed into "mystery cars" through sometimes minor, sometimes major body modifications. But it remained a relatively small and localised fad before many of the participants in this trend were called into service in WWII. Two things happened to spread the gospel of hot rods and custom cars during World War II. First, many servicemen were filtered through California on their journey to the Pacific. There, they witnessed firsthand America's car-culture capital, with its unique customs and stripped down hot rods ripping through the streets. It must have left quite an impression on many.

Second, many GIs from Southern California spread information and pictures of hot cars to any soldier with time to spare. The racing and cruising activities must have seemed cool and exciting to any young soldier. Simple exposure must have been enough to spark the interest of young soldiers. So once the seed was planted, it had to be nurtured, and for that we can thank Robert "Pete" Petersen and Hot Rod magazine, which came on to the scene in 1948. After the war, the economy boomed. Young veterans had a bulletproof attitude after facing the horrors of combat, and they now found themselves with excesses of time and money, along with mechanical skills learned in the service. The postwar energy helped hot rodding grow more than it ever had in Southern California, and Hot Rod spread the word nationwide. 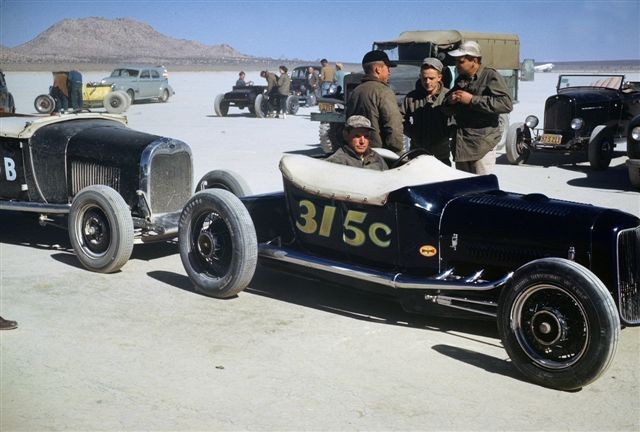 Hot Rod picked up where Throttle left off, the latter never returning after its one-year run in 1941. The fledgling magazine touched on all aspects of the car-enthusiast arena, covering hot rods, custom cars, drag racing, and even circle-track racing. Hot Rod also informed readers about the latest speed equipment, and taught them how to perform engine and body modifications. Hot Rod was in a good position to promote safety, and to help organise early drag racing and car shows, all of which helped promote and organise hot rodding itself. Speed-parts manufacturers and custom and performance shops had a place to advertise. It was a win-win situation for all involved.

As the end of the 1940s approached, hot rods and custom cars were poised to become not just a trend but a lifestyle. Postwar adolescents were discovering the freedom and social significance of driving a unique automobile on the streets of Downtown, USA. Picture this - It's a summertime Saturday night in the 1950s, and the Southern California suburbs are hopping with hot rods. In the San Fernando Valley just north of L.A., ex-GIs are bent over their crude roadsters doing last-minute checks before heading out at midnight to one of the dry lake beds east of Los Angeles.

Their goal is to be first in line for the heads-up racing that starts at dawn. Soon they'll aim their headlights for the excitement of speed and the camaraderie that goes with running the straight, dusty courses. But first, a few of them conduct impromptu light-to-light races down San Fernando Road to check out the clutch and size up the competition. Over in the bedroom communities of Lakewood, Lynwood, and Compton a few miles west of L.A., cruisers in their late teens and early 20s are "drive-in hopping." It's a ritual that takes off from The Clock drive-in in Bellflower, then heads down Pacific Coast Highway to The Clock on Sepulveda in Culver City, over to Tiny Naylor's in Hollywood, onto the freeway to Toluca Lake and Bob's Big Boy, over to Bob's in Pasadena, a straight shot west to Nixon's on Whittier Boulevard, and finally back to The Clock in Bellflower.

Occasionally, street racing accidents end up on the front page of the Orange County Register in grisly detail. There is safer, organised racing in Orange County, too. It's the abandoned airstrip, which is considered the first organised drag racing venue in the country -- Santa Ana Dragstrip.

It's the golden age of the hot rod and custom car, and Southern California is the place to be. Decades from now, these scenes will be relived and recreated thousands of times. Hot rods and customs from this period will be revered, copied, and restored to preserve for all time this magical era in automotive history.