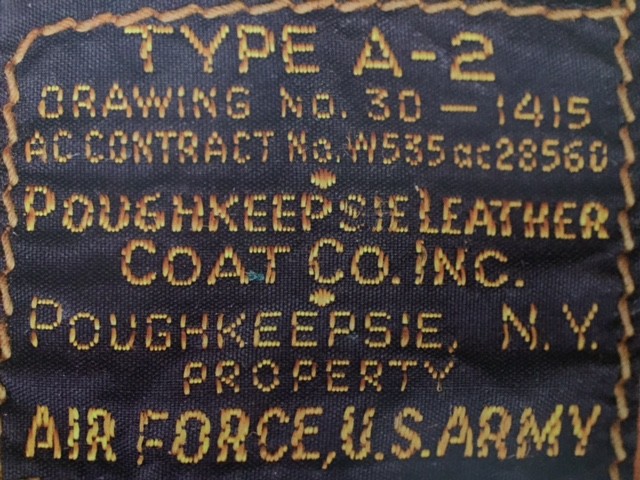 A total of 18 manufacturers were officially contracted to make the type A-2 flight jacket, between 1931 and 1943. In that time, more than three quarters of a million pieces were produced between them, at a cost of nearly six and half million Dollars.

Most of these firms were from the arena of sporting goods and outerwear manufacturing. Their titles often conveyed the nature of their purveyance: Star Sportswear Mfg Co, Cable Raincoat Co, Poughkeepsie Leather Coat Co and so on. Such was the industrial might of the US, companies like this could be relied upon to supply all the necessary requirements for war materiel: the US had at its disposal the largest and most formidable industrial infrastructure in the world, and once mobilised, it was quite simply an unstoppable juggernaut of war production.

Indeed, such was the momentum of this immense war machine, that by the end of hostilities there was an over-run of production of all kinds of clothing and equipment, surplus stocks of which can still be found today which have never been used. Unfortunately, any surplus stock of A-2 jackets have long since been consumed, but nevertheless, they did exist. 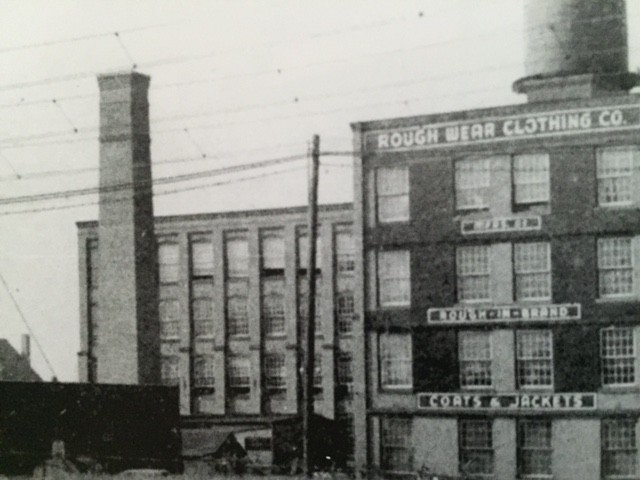 Winning a government contract wasn't an easy undertaking, competition was hot. For every one of the 18 manufacturers who officially produced the A-2, dozens of other companies tendered bids who were not accepted. The process went like this: the government put a contract up for offer, manufacturers would tender bids over a given period. Materiel Command would then consider these bids based on a list of criteria that the manufacturers would be assessed on. Needless to say, cost was quite high on the list but other details such as condition of equipments, production capacity, reputation, experience of managers and so on, were also part of the selection process. Most were turned down for one reason or another, often to their severe displeasure, as of course, to be awarded a huge consider contract was extremely lucrative. Indeed, contracting officers would often receive letters of protest from rejected manufacturers. Sometimes, anonymous tip-offs of underhanded practices, or back hand dealings, would be reported in order to discredit the competition.

Squabbles also occurred directly between companies, one resulting in the fire bombing of the Werber Coat Co. The Aero Leather Clothing Company was accused and a court case ensued. This event might account for Werber's move from Beacon NY (the same Leather district as Aero) to Newburgh in the mid-30s, just after the fire, and also the gap in their otherwise regular list of contracts they were getting each year until then. (If one examines the manufacturers list, apart from the very first A-2 contract awarded to Security Aviation Togs, Werber was the sole contractor from 1933 to 1936, at which point Aero comes into the picture). 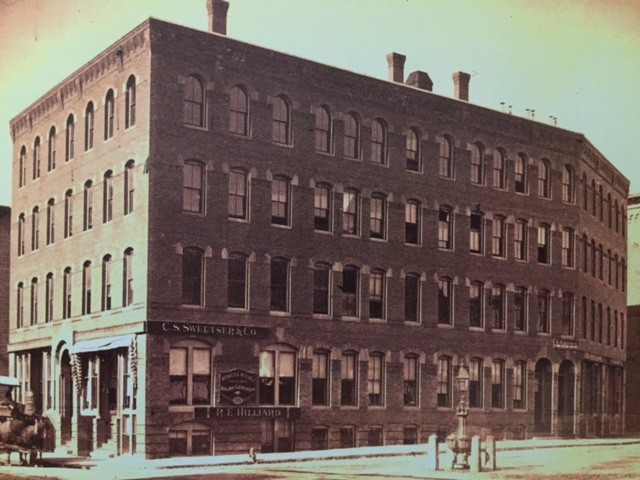 Many of the manufacturers were located in relatively close proximity to each other, particularly in the industrial districts in and around New York, which, needless to say, had some tough individuals at the helm. When tens, possibly hundreds, of thousands of Dollars were at stake, the competition to secure a contract was intense. Understandably, during the peace time of the 1930s, the contracts awarded during this period were for lesser quantities than those that were to follow once the US entered the war. When one examines the data, the exponential increase in the late 30s as the slide toward conflict became inevitable. One can also see how certain companies were obviously favoured over time, as repeat contracts were awarded to them, and not to others.

Upon the award of the contract, the selected company would be sent a written specification, along with a set of detailed drawings, which described and illustrated every detail of the garment and how it should be assembled. In addition to this, they would be sent a formal contract and secrecy agreement for signing. However, even with such detailed instructions, each company interpreted them differently, albeit minutely, which resulted in slight differences after the various makers. The differences we refer to as the 'company house style'. Details such as pocket profiles, collar shape, seam allowances, vary to some degree or other between each maker, giving their garments their own unique subtle between and house style.

To ensure a standard of quality was maintained, each company was visited by an Army-Navy inspector from the Materiel Division whose responsibility was to check the garments before they were released for shipment. A-2's were made in 'lots' meaning a contract would be broken down into smaller groups. Jackets would be randomly plucked from each lot for inspection, and if they passed, they would be stamped in the lining with the inspectors personal numbered AN (Army Navy) stamp. Not all A-2s have an AN stamp for this reason. 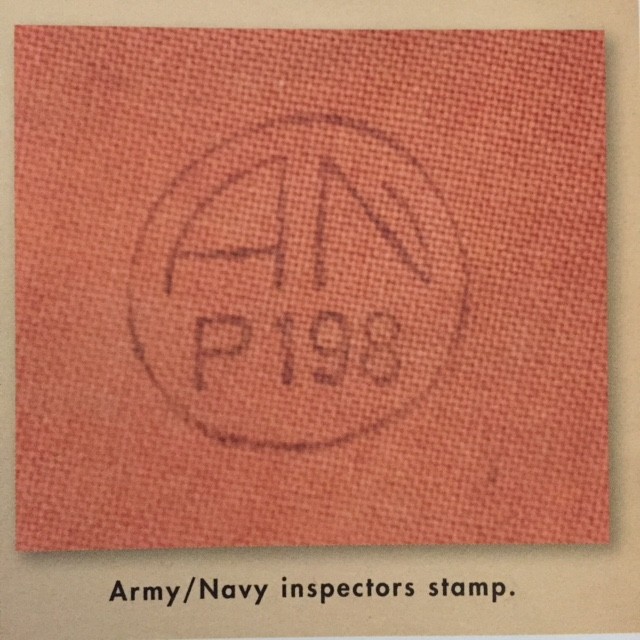 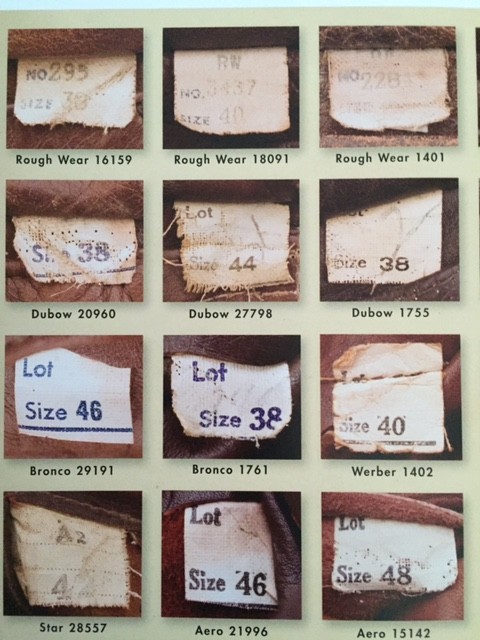 It is evident from examining original samples that not too much emphasis was placed on things such as neatness of stitching, alignment and so on (even though this was part of the inspection criteria) or at least if it was, the inspectors were evidently lenient.

Generally however, the construction was good: these items were not for high street sale after all, they were work clothes, so quality control was focused more toward their meeting the functional requirement. The inspectors examination would be a pragmatic one, based on the overall serviceability and quality of the garment: Is the leather of the correct weight? Are all the fastenings in place and functioning? Are the the aligned sleeves correctly? Is the garment appropriately labelled and sized? Not so much emphasis was placed on aesthetic things such as matching grain in the leather, or a bit of uneven stitching, indeed original stitching samples indicate some jackets left a lot to be desired in this regard.

After the war, many of these manufacturers continued to net government contracts, as well as maintaining their original practice of supplying the civilian market. However, as time went on, most of them have either closed down, or evolved into other industries. With the passing of time and urban renewal, many of the manufacturers buildings are gone. In some cases, the whole district has been completely renewed, leaving no trace of buildings or even the road layout.

Scattered across the US, but mostly in the East, these 18 manufacturers produced in excess of 750,000 A-2 jackets - one of the most significant and influential garment designs to come out of the 20th century. Much more information on this subject can be found in the Eastman Type A-2 Flight Jacket Identification Manual available HERE.