“The basic specifications for United States aircraft now flying in combat areas were laid down five years or more ago, an indication of the slow process of aeronautical design in peacetime. Germany had a definite plan for employment of its aircraft then under test. So did Japan. So, for different reasons, did the designers in England. A striking proof of their conviction is the Spitfire – a splendid fighter, admirable in all respects for the defence of France and, as it later proved, of England itself.”
US Office of War Information, 1942

When the Eighth Air Force began arriving in England in 1942, it was initially planned that what fighter units would be assigned to it would utilise the Lockheed P-38 Lightning for high-altitude, long-range fighter escort, while the Bell P-39 Airacobra would provide escort for the medium bombers that were coming.

The first P-39 unit to arrive in England was the 31st Fighter Group – the first unit to have taken the Airacobra operational the previous year – though they arrived before their aircraft. In the interim, they were equipped with the Spitfire Mk. V. By the time the similarly-equipped 52nd Fighter Group arrived, the RAF had been able to convince the Americans of the unsuitability of the P-39 for aerial combat in western Europe. As a result, both groups were equipped with Spitfire Mk. Vs. During the summer of 1942, the 307th and 308th Fighter Squadrons of the 31st Fighter Group went to Biggin Hill and Kenley respectively for temporary attachment to RAF fighter wings where they could receive an introduction to combat. The 309th FS went to Westhampnett, and by August 5, all three units were operational. Their baptism of fire came on August 19, when they flew air support for the Dieppe Raid, losing eight Spitfires and seven damaged, with one pilot killed and another made prisoner; two Fw-190s were claimed destroyed, with three probables and two damaged. With this, the 31st was considered blooded, and was reunited as a group at Westhampnett, while the 2nd and 4th Fighter Squadrons of the 52nd Fighter Group took their places at Biggin Hill and Kenley.

Before either group could have more effect, they were transferred to the XII Air Force that September, as the North African invasion loomed; by late September, both units had left England to enter combat in the Mediterranean. During the opening day of Operation Torch, Major Harrison Thyng, CO of the 308th FS, shot down two Vichy D.520s to open the unit’s score in the Mediterranean Theatre. In December and January, the 52nd Fighter Group entered combat in defence of the port of Bone. On January 13, 1943, 1st Lt. Norman Bolle shot down 114-victory Lieutenant Wilhelm Crinius of II/JG-2. On February 4th, their luck was reversed when 12 Spitfires of the 4th FS escorting ground-strafing P-39s were hit by Kurt Buhligen and Erich Rudorffer of II/JG2, taking down 3 of the Spitfires for no losses. Throughout this period the Americans found themselves frequently outclassed by the flying of JG2 and JG77, sent to counter the North African invasion. 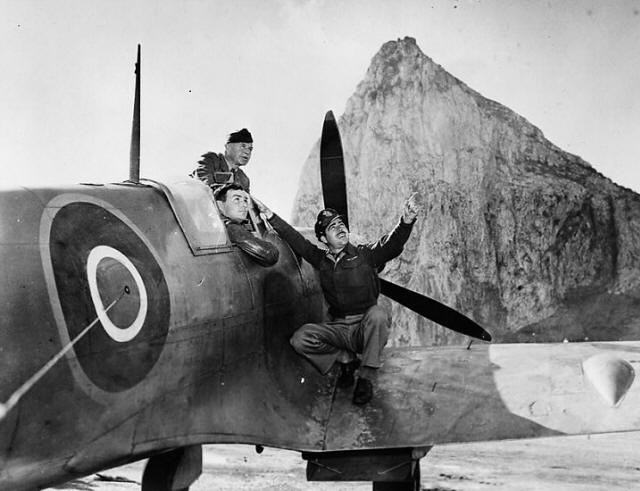 During April 1943, Captains Norman MacDonald and Arthur Vinson of the 52nd FG became the first USAAF Spitfire aces, though Vinson was lost immediately after shooting down his 7th victim. By the time of the Axis surrender in Africa on May 13, the 52nd FG claimed 86 victories and had added a third ace – Lt. Sylvan Field – while the 31st FG claimed 61, and two aces, Lt Col. Thyng and Major Frank Hill. Hill would become the top US Spitfire ace of the war with 7 victories. In August 1943, the 308th FS of the 31st FG – the group’s most successful squadron – became the first USAAF unit to operate the Spitfire Mk. VIII, the group having had some Mk. IXs in limited operation since the previous April, with enough in each squadron to provide a high cover flight for the Spitfires Mk. Vb. The new Spitfires first saw combat over Palermo, Sicily, on August 8, 1943, when 20 Bf-109s were encountered, of which 3 were shot down. On August 11, the 308th claimed two Fw-190s and a Macchi C.205. There would be additional combat over Italy in late September during the Salerno invasion, and then things quieted down.

By December 1943 the American groups were flying bomber escort in Southern Italy. In January, 1944, 1st Lt. Leland P. Molland, a recent arrival, made the first two of his eventual five scores in the Spitfire Mk. VIII, in combat with Fw-190s intercepting American B-25s escorted by the Spitfires.

The Anzio invasion on January 22, 1944, brought the Luftwaffe out in force once again, and the 31st FG scored against 18 Fw-190 fighter bombers over the beachhead. That evening, Spitfires of the 2nd FS, which had moved to Corsica with the rest of the 52nd FG, intercepted 50-60 He-111 torpedo bombers of KG26 bound from Marseilles to attack the invasion fleet off Anzio, and forced most of the German bombers to drop their torpedoes, while shooting down seven Heinkels and damaging three Ju-88s. The next day, the 4th FS intercepted six Do-217s equipped with Fritz-X bombs and shot down two, scattering the others.

Through the rest of January, both units engaged in numerous combats over the beachhead and as far inland as Rome. On February 6, 308th FS CO Maj. Virgil Fields was shot down and killed. Lt. Molland, who became an ace with his fifth kill in the fight in which Fields was lost, moved up to command the squadron.

By March 21st, the 308th had raised its total score to 62, with 1st Lt. Richard F. Hurd becoming the second highest-scoring US Spitfire ace with 6 victories. On March 11, 1944, the 31st FG had received their first P-51B Mustang. On March 24, the unit was taken off operations to handle full conversion to the Mustang, despite the feelings of many of the pilots that they were being asked to take an inferior airplane to their Spitfire Mk. VIIIs and IXs. On March 26, 1944, the 31st flew their last Spitfire mission, with four Spitfires Mk. VIII of the 308th FS finding 20 Fw-190G fighter bombers, of which they claimed one destroyed and three probables for the group’s last victories in the Spitfire.

The following month, the 52nd Fighter Group followed the 31st into the Mustang and on to the new 15th Air Force, with the last US Spitfire victories being 3 Bf-109Gs shot down of 6 that attacked the Spitfire IXs of the 5th FS of the 52nd FG during a bomber escort to Orvieto, Italy.

Uncle Sam’s Spitfires had written a little-known chapter in US fighter history. Though the USAAF used over 600 Spitfires during the war, the aircraft was never given a US designation, and little publicity was given to the exploits of the 31st and 52nd Fighter Groups – nothing like what they would get in the summer of 1944 during the wild air battles over Ploesti when they flew Mustangs. This is most likely a good example of the US military’s overall dislike of having to admit to using “NIH” (Not Invented Here) equipment.

During their time in Spitfires, the 31st FG claimed 194.5 confirmed, 39 probables and 124 damaged; the 52nd claimed 152.33 confirmed, 22 probables and 71 damaged. Thirteen pilots became aces on the Spitfire. Leland Molland went on to score another 6 victories in the summer of 1944 in the P-51 to bring his score to 11. Harrison Thyng added 5 more victories to his 5.5 as CO of the 4th FIW in Korea, while Royal N. Baker, who scored 3.5 in Spitfires added another 13 in Korea.